Back in October when we had an early snowstorm, I thought Fall was over... But it lasted and lasted and lasted! We were still out for bike rides up to Thanksgiving, when I realized that my toes were getting a little cold in my Chacos! :) Last week, we went and got some boots for Landon (which he now loves to wear around the house - quite a sight to see this little guy w/ his pjs and spiderman boots!) and since then, every morning that we woke up with still no snow, Jordan was a sad Daddy!

But, at last the snow came! Growing up in Utah, I've never been too excited about snow, but this sweet guy who just bought snow boots for his little boy was sure thrilled. The first flakes were just falling, not sticking at all and hardly even visible, but Landon saw it and ran through the house "I need my boots!" 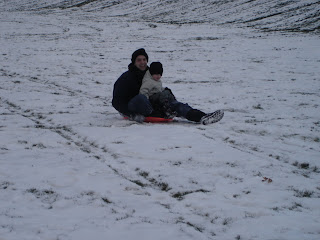 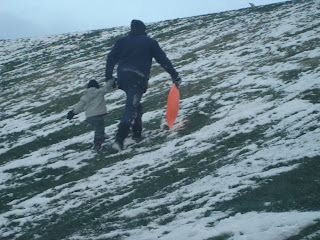 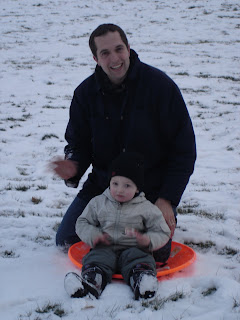 This was the first day it snowed, after a sunny afternoon so it looks a little funny with all the grass on the hills but the sledding worked great still.

And "It's snowman time!" (That could have been Jordan or Landon's exclamation, I'm sure I heard it from both of those boys. :) 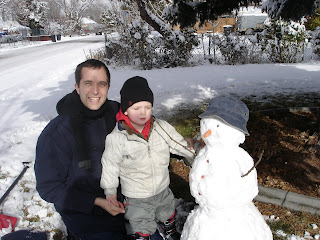 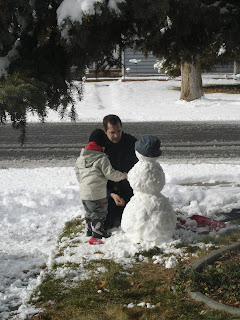 Since they built this yesterday, Landon has to keep going out to check on his snowman to make sure he's still there and doing okay.

I woke up one night to put Landon back to bed and glanced out the window to see these sweet tracks from my little boy (and Jordan too!)-- what a happy sight to see! 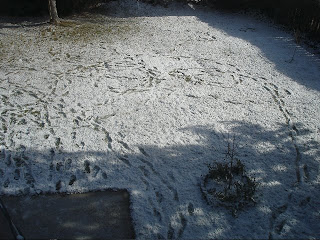 Posted by Debbie Brough at 7:36 PM