A couple of weeks ago, Jordan was talking with Ellie about how our vision works and how the brain can automatically join the picture from our right eye with our left eye into one image, etc.  Landon got involved in the conversation and as they continued talking and experimenting, we learned that everything was fuzzy when Landon looked just with his right eye...

So we made an eye appointment and had some hard news. (I probably should have been worried when the eye doctor asked Landon 'Why are you here today?' and Landon answered, "Because I pretty much can't see anything with my right eye." I definitely thought, shouldn't I have known that before today?)

First, Landon definitely needs glasses (not so bad.) Second, he has likely needed glasses his entire life (not so good!). And last (the hard news), since his vision has been so poor in his right eye, but fine in his left,  basically his brain has developed ignoring  whatever it sees in his right eye. Which means at this point, even with a perfect prescription, he still can't see very well at all with that eye.

Doctors have previously thought that treatment for this issue could only be helpful up to age 8. (How did we not know Landon couldn't see well all these years?!)  Recently they've found that treatment can be effective with older children, though it's unlikely that he'll ever recover full vision in that eye, even with glasses.  :(

We're picking up his new glasses today, and there are other treatment options we'll start in a few weeks (Jordan's getting him excited about becoming pirate Landon with an eye patch over his good eye a few hours a day!) So we'll just do whatever we can and hope for the best, but oh man! I wish we'd discovered this sooner!

As we drove home this morning, Porter spotted our corner trees all covered with beautiful popcorn-ball blossoms and exclaimed,  "Look at the trees Mom! They're getting so wonderful!"

Also, yesterday Owen and I took a quick walk to the park for our preschool time because Owen was so excited to show me the nest that he'd built with McCall on Monday. Unfortunately, the nest was gone, but he happily made a new one with the new grass clippings the mower had left behind. (And I just loved such a happy little walk with my little boy!) On the way home he stopped at our blossoming trees to pick a few flowers as a gift for me which we carefully arranged around another vase of flowers on the kitchen table.

I love these boys!

I'm not sure if it was when Owen was a baby or Porter, but somewhere along the way of new babies + not enough sleep, Jordan started the tradition of Saturday morning movie time. He helps the kids wake up and get situated so quietly while I get to sleep in (hooray for Jordan!) And even though it is not nearly such a desperately needed event these days, I still look forward to it every week!

The only problem has been that it is often hard for the kids to transition from too-much-screen-time to Saturday working time mode. So this week we made an extra effort to help with that transition and to get all of our Saturday jobs done cheerfully-ish. And with some help from Jordan for each of the kids when they reached their breaking down point... everyone did really great. :) 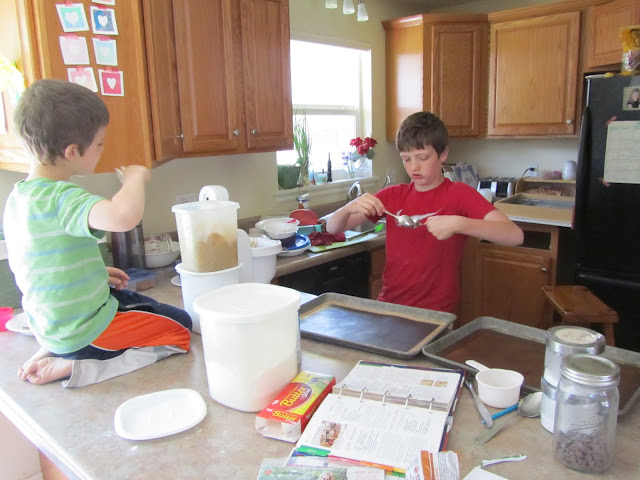 As we finished up, Landon had the lemonade ready and his plans all set for a lemonade stand. He even got out the recipe book and (with just a little help) made some delicious chocolate chip cookies  while Ellie worked hard on decorating their sign.

Posted by Debbie Brough at 7:13 PM 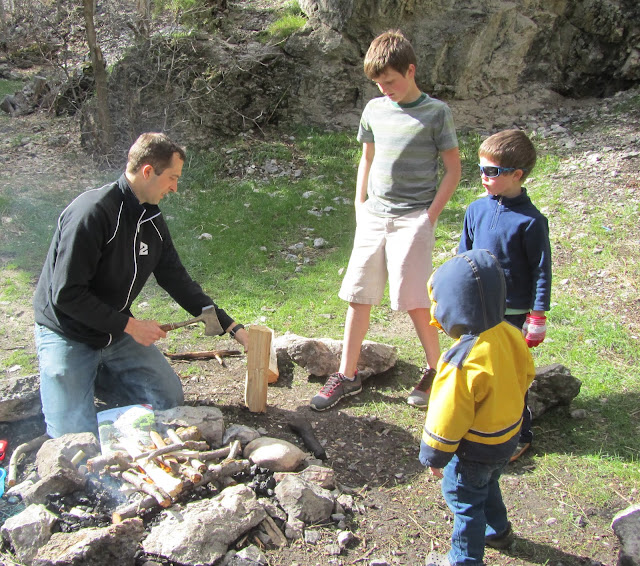 We had our first campfire of the year this weekend! Jordan and the boys rode bikes to Green Canyon and picked out a spot for us, while Ellie and I grabbed some dinner and s'mores. We met in this beautiful Spring green spot and had a great little evening! 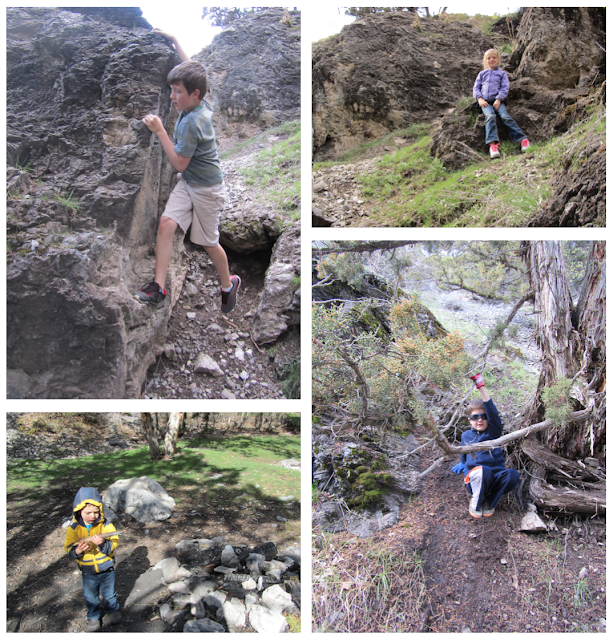 While Jordan built a fire, the kids explored and collected little shells which turned into currency to rent or purchase each other's secret hideouts. 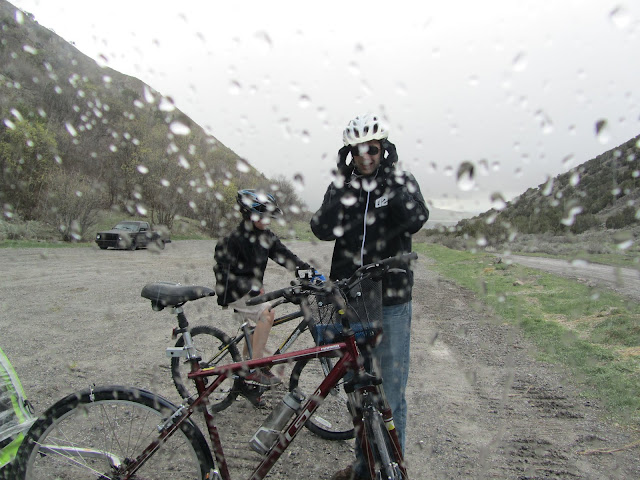 As we were packing up, the wind started to blow and just before we made it to the trail to walk back to the van/bikes a storm hit with little hail/rain/snow falling pretty quickly. The younger kids and I were happy to drive back in the cozy van, while Jordan and Landon braved the storm by bike. (Just another reason to be happy for such a short distance between our home and the canyon!) 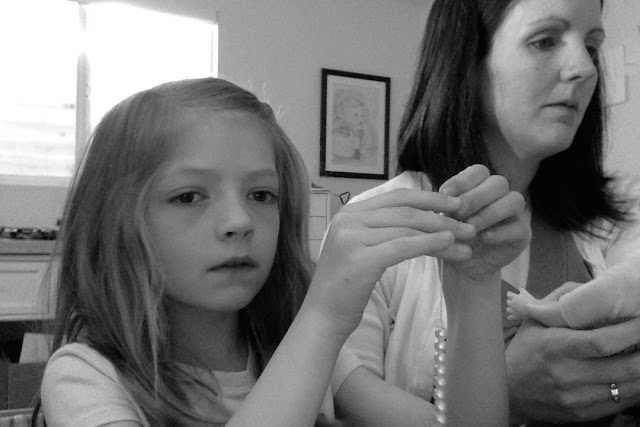 At the end of Spring Break, Ellie and I had made plans for some girls time with a trip to Baby Animal days at the American West Heritage Center. We raced out the door to fit it in between General Conference sessions, while Jordan took the boys on a bike riding/conference listening adventure for the afternoon.

When we got to Baby Animal days, it was crazy busy and we quickly changed plans. Ellie voted for a trip to Macey's for a little treat and birthday shopping for Owen, so that's just what we did. Then while we listened to the afternoon session of Conference, we colored some Made By Joel coloring sheets (we love these!)  and then worked on making new clothes for one of Ellie's dolls. By the end of conference, we'd made leggings and a skirt, a new hair clippy and a necklace all for her little doll. 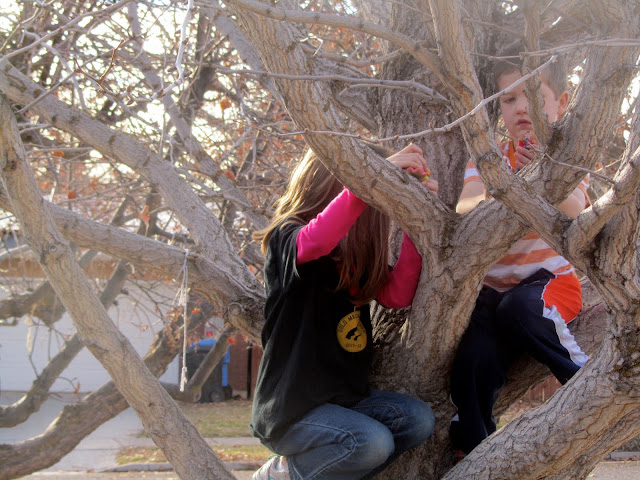 getting ready: for a trip to London, a bedroom switch for the kids, and summer break coming right up. And this baby boy too!

reading: 1776, and lots of fun kids books and London travel blogs and Logan's city planning documents and Far North with Jordan in the evenings.

figuring out: a new schedule and family time routines as Jordan gets into his early work schedule. Also, how to have sugar be a not-a-big-deal kind of thing, while still making healthy choices. And how to get our friends tandem bike that we borrowed repaired well, and how to do a little scripture study in the morning with Ellie and Owen.

working on: trying to go for more walks, making sure to get the kids ready for bed early enough that Owen gets to have reading time, painting a new (from DI) bed for Ellie's new room, helping to support the neighborhood with the Deer Pen issue, tidying up the yard, finishing up taxes (I've always filed in Febraury, but somehow put it off this year and now it's suddenly a stressful to-do!), teaching Porter to ride his balance bike

eating: springtime strawberries (hooray!) and roasted cauliflower (a great new discovery) and cinnamon toast crunch (I finally gave in), and made-by-Ellie snickerdoodles, and restaurant food (after our no eating out in March plan ended :) and our favorite oatmeal for breakfast every day. 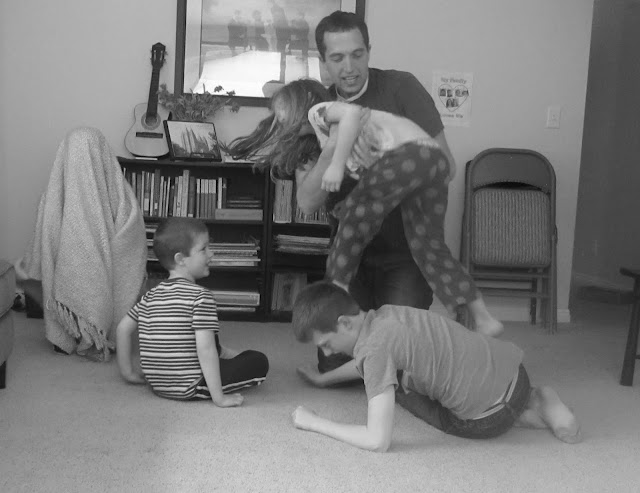 One of the kids' favorite things to do with Jordan every once in a while is to play the sock game. The rules (as far as I understand them) is that they all have to work together to wrestle Jordan, get his socks off of his feet, and make it safely to the reading room with the socks to become the champions. (I love this picture where Ellie and Landon are working hard, Owen is smiling in amusement, and Porter is happily being a blanket ghost in the background!) And I love that these kiddos have Jordan for a dad to play with like this!
Posted by Debbie Brough at 11:49 AM