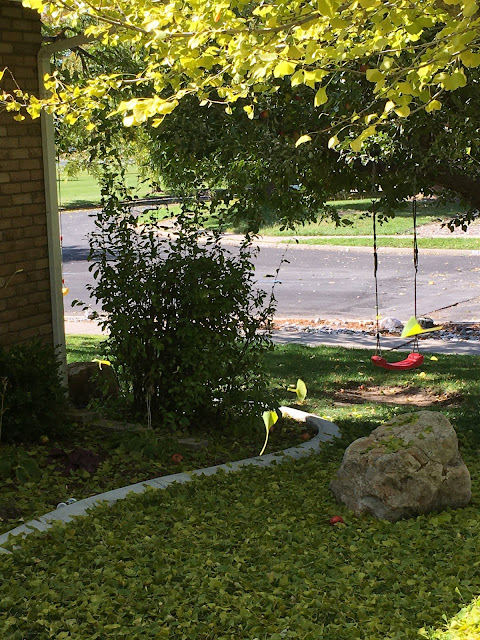 Today is Ginkgo day! The temperatures hit just the right spot and our ginkgo tree has been raining leaves all morning. The kids are going to be thrilled to grab their rakes and play in these soft leaves when they come home! :)

Other things I love today --

Isaac and I went out to see if there were a few ripe raspberries left this morning for our fruit toast snack. There were, but they were perfectly frozen! :) Not quite what we were looking for, but a delicious way to finish off the year's last berries!

My favorite sunglasses have been missing, so I pulled out an old pair for my morning walks the last few days. They have the most perfect rusty orange tint to them that make all the gorgeous Fall colors of our neighborhood that much more beautiful.

I woke up early this morning to the sound of Landon working in the kitchen, making German pancakes for breakfast. He has been learning new recipes for a class in school, and it is so fun to see him so excited to keep practicing and making them at home!

We went to a bit of the Cache Valley Brazilian Festival where one of the kids performed a song/dance in Portuguese (and two of the kids watched as their classes performed :) I stood by a group of the Portuguese teachers and felt so grateful for these great women who my children spend their school days with.

A few weeks into September the kids and I were all finally well (even all at the same time!) The great news even through the sick weeks was that the kids were feeling sad to be missing school (hooray!) and they have continued to feel pretty happy about school so far. This past week we had parent teachers conferences and the start of homework for the year, and so far everyone's still doing okay.

Isaac has been telling anyone he meets "I do preschool now!" Our neighbor stopped by yesterday and was sweet enough to stop and ask him more questions all about it, and Isaac finished his preschool conversation with the sweetest "Yee-hoo!" of excitement all about this happy preschool time with Mom.

Landon and I went to the first middle school PTSA meeting and Landon volunteered to be in charge of Reflections (one thing I have made a point of avoiding :) It was fun being in a new setting like this with Landon though!

We took advantage of Labor Day weekend to get started on our basement flooring. The kids were amazing helpers. Jordan and I were both just amazed seeing them carrying load after load of carpet up and floor boards down -  these are some tough kiddos! With lots of hard work from Jordan, we're just about done and moving on to the next steps of a bit of painting (scheduled), baseboards (need to schedule), and couches (ordered!)

Jordan and I have been trying out a new meal plan thing, and I'm pretty sure I have made more new recipes in the last few weeks than I have in the last few years! It has been more work (and more dishes!!) but also fun to remember how much I really do enjoy cooking (especially without the decision-making part required).  This past weekend we had a beautiful, cozy, rainy Saturday and I spent most of the day baking and cooking and prepping things for the week and it felt just right.

Jordan and Landon did a few practice rides for Bike the Bear. One week before the event, they intended to do a 30 mile ride with hills to make sure they were really ready. But then, they ended up just doing the full ride! A week later they had fun with the whole pasta dinner/overnight/race day events and both did awesome on this 50 mile ride.

Jordan and I (and Isaac :) went to one of Logan's Silicon Slopes events with the Lt. Governor speaking about technology in rural Utah. We were particularly interested in his ideas about improving employment opportunities through remote work, since Jordan has had great experience with that!

One Sunday morning just before church, with frustration about my requests for him to do his hair, one of the boys (no names will be named...) took matters into his own hands and snipped off the front of his hair (!) After a few attempts of blending his very-short snips later that day, he ended up with an all-around very short hair cut. (This caused a great deal of angst for this kiddo the next morning when it was school picture day, but has since been appreciated since morning hair is always done! :)

And now, Happy October!
Posted by Debbie Brough at 11:24 AM