At the library this week, Owen was trying to find a good replacement for his Fox in Socks book he'd just returned. This was our discussion on our way to a new spot with all of the Caldecott books -
Look, Owen. I know where they have some really great books!
I don't want a really, really great book today. Just a regular book.
:)
Posted by Debbie Brough at 3:55 PM

A tale of two ER visits (and my first ambulance ride!)

I was playing with Porter in the reading room when I heard Ellie and Owen calling for me from the bath. I went to pour in some more bubbles for them and then walked back out the door to hear the terrible thump, thump, thump, cry of Porter falling down the stairs. (We hadn't put the gates up yet, because I hadn't realized how fast he could already crawl, but they are up now!) The poor little guy was so limp and tired and sad for long enough afterwards that I was really worried and asked Jordan to give him a blessing and I called the pediatrician.

With his symptoms as they were, she suggested I take him to the emergency room, and so I did. I think that Heavenly Father just healed his little body though because by the time we got all checked in and the doctor came in to see us, Porter was just sitting up on my lap, looking around, smiling at all the nurses and about as happy as a little boy could be. So although I felt pretty silly at that point sitting in the ER with a perfectly healthy baby boy, I was just so grateful that he was okay that I didn't even mind too much.

A few days later, I was back in the ER and found myself talking with the same doctor again (yes, I was just here a couple of days ago...)  Ellie was super sick and her croup had gotten bad enough through the evening that we decided to take her in to instacare. I got there with a super sick and exhausted Ellie and they surprised me by hurrying her in to see the doctor after her initial check-in with the nurse.

A few minutes later, Ellie was set up for some breathing treatments and the paramedics were on their way to take us to the hospital via ambulance. (Ellie's oxygen was quite low and the doctor was worried enough about her difficulty breathing that they required the treatments/ambulance ride/monitoring at the ER). Little Ellie was as brave as can be (or just as miserable as can be) and the paramedics were so super kind and professional and accommodating. They held my bag and let me carry Ellie out to the ambulance and I just held her in my lap with her oxygen and breathing equipment while we rode the 5 minutes to the hospital.

It was a busy night at the ER, so by the time the doctor had a chance to come in, the steroid medicine and breathing treatments had worked their magic and Ellie was sitting up in the bed watching Magic School Bus on the iPad and feeling better than she had all day.

{A few days later we were back at instacare with both Owen and Ellie.  The sweet nurse who'd helped us on her first visit was there again. I was so touched when she told us that she'd stopped by the ER after her shift that first night to check in and make sure little Ellie was okay. How wonderful to know she was being cared about on such a hard night.}

And today, at last, Ellie and Owen were running around the house and playing and even went on a walk around the park. And oh, I'm grateful that they're getting better!
Posted by Debbie Brough at 3:50 PM

In the last week or so, we've had 2 emergency room visits, 1 ambulance ride, 3 urgent care visits, 3 sick little boys + 1 even more miserable Ellie, and 1 sick as can be parent (Jordan's praying hard that I'll stay well.) And goodness, it's been hard!

I've tried (sometimes well, sometimes not) to remember this talk -- and be thankful for all the little and great things that have still come each day. The kind and patient and professional doctors and nurses and paramedics and pharmacists. Health insurance and our savings set aside for medical needs. Tylenol and antibiotics and other medicines and heat packs and humidifiers and hot showers. Popsicles, and ice cream, applesauce and juice and jello. And most of all kindness and prayers from people who love us so.

And beautiful Spring days outside our windows too.

And now I'm hoping that rainbow (of a healthy family) really will come soon! :)
Posted by Debbie Brough at 6:45 PM 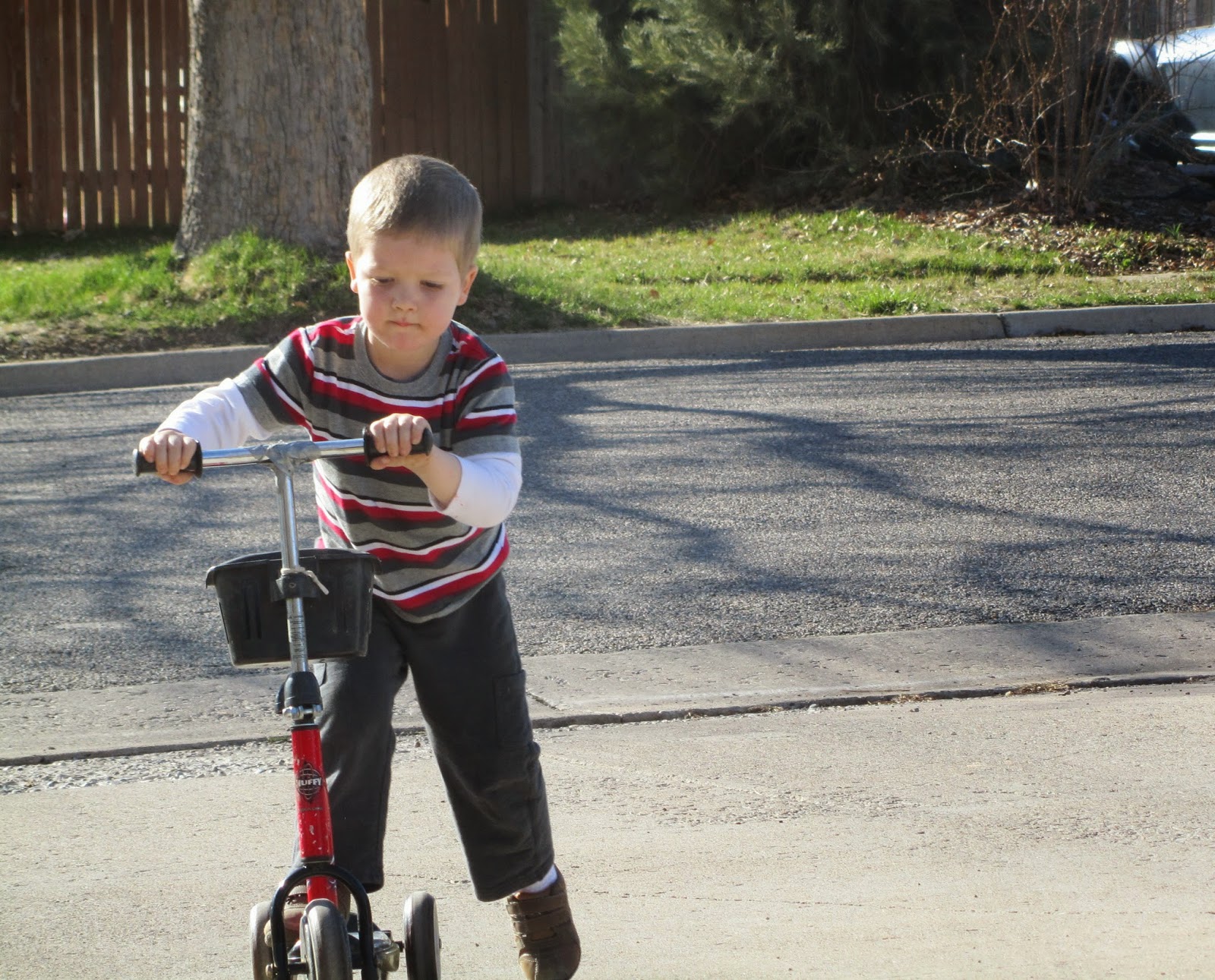 Owen, sitting down to a snack "Mom?"
(me holding squirming, hungry Porter, choosing some lunch for him - 'apples and chicken' or 'mixed cereals with berries'?)
Mom?
(wrangling Porter into the high chair)
Mom?
(opening up the baby food as quick as can be for must-be-starving Porter)
Mom?!?
Yes, Owen?
We don't eat people.
me: That's right, Owen :)
Yeah, that's right. We just eat food.
(a pause to eat more snack)
And animal crackers!
Posted by Debbie Brough at 5:30 PM


I'm strengthening my own brave muscles with a new project -- blogging for the Cache Valley Volunteer Center. I just hit publish on my first post and I think my brave muscles grew at least 50! :)

One of the fun things I've noticed as Porter has started to make some definite sleep progress is that I'm actually cooking with recipes again. (Meaning, we're  going beyond grilled cheese kinds of dinners at long last!) In honor of this past week with possibly more recipe usage than the last 8 months combined, I thought I'd share a fun new find :)

I made this Chocolate Quinoa Cake for dessert yesterday (Landon was fasting for the first time and I was so proud of him, I wanted to celebrate and this was the perfect thing. He also saved the day by visiting all of our neighbors in search of 4 eggs when we realized we were out!)  With leftovers for our FHE treat tonight, I'm still trying to decide what I think of it compared to regular chocolate cake, but it was delicious and also just pretty fun trying out some  new ingredients that I've never really tried cooking with before. (And the frosting was especially amazing!)

I also made these gyros this week for dinner - Liz wrote about them as a ridiculously easy weeknight meal, but I felt like I was a gourmet chef to make something even this involved on a Thursday night (Jordan was impressed too  - he walked in while I was working and couldn't believe that I was even cooking chicken! This is the state of our lives :)
Posted by Debbie Brough at 8:11 PM

There are few things Landon loves more these days than a chance to hold Porter. In the morning when I'm still waking up in bed, the first thing Landon will usually say as he comes into my room is "Can I hold Porter?" (A yes means the start of a good day, a no…well, a no usually means he'll ask again a few moments later and then again and again until I say yes :)  I'm still learning how to relax and not become a mother bear with all the twists and turns and bumps and wiggles that are involved in the holding Porter process.  I sure love how Landon loves his little brother.
Posted by Debbie Brough at 8:23 AM

This little Owen has such a sweet, tender heart. He and Ellie are helping me and Jordan learn how to be kinder with our corrections. Whenever we have a stern talk with Owen about something he's done (or he thinks that's what we're doing), he gets teary and says "I didn't want you to say that!"

(And just look at that little one, how could we ever be stern to such a sweet boy as that anyway?)
Posted by Debbie Brough at 8:04 AM 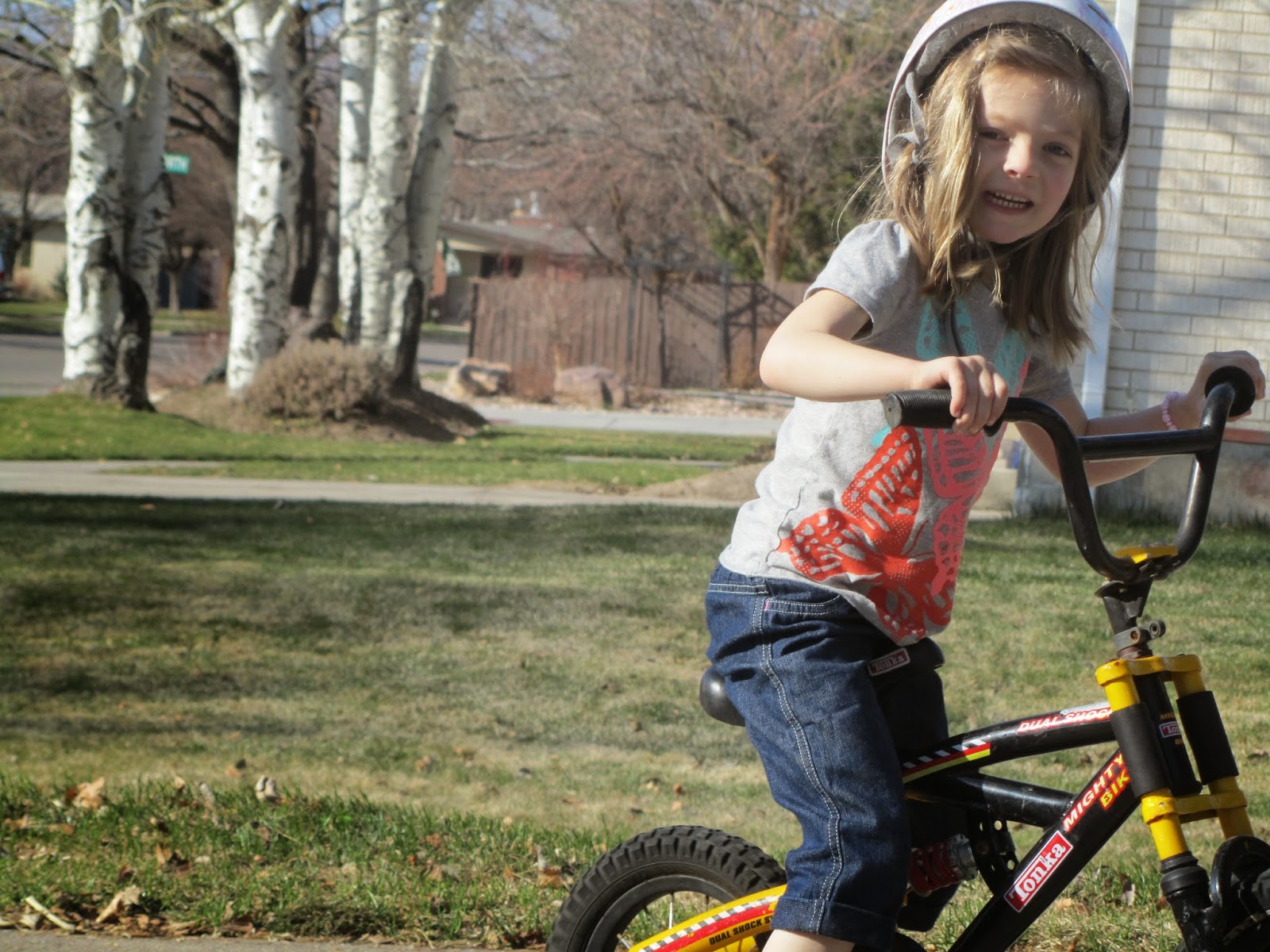 Sometime last summer, we were encouraging Ellie to be brave about trying something new and we talked to her about 'exercising her brave muscles' to help them get stronger. Little by little and in true Ellie fashion, those brave muscles have grown. And she can tell you just exactly how much. She has a system all in place and whenever she uses those brave muscles, they grow -- 10 points for things that are a little hard, 50 for things that are so hard.  Going under water at swim lessons (50 points!),  shaking hands with our home teachers (10 points), collecting Easter eggs all by herself at the Easter egg hunt (50 points!), buying a treat at Lee's all by herself (30 points - 10 for handing the cashier the treat, 10 for giving him the money, and 10 for taking the change and receipt), learning to climb our taller front tree, asking for help from the teacher at kindergarten orientation, riding her bike with no training wheels… those brave muscles just grow and grow! Last I checked, Ellie's brave muscles were at 1,320 - what a little sweetheart!
Posted by Debbie Brough at 8:02 PM

Yesterday after work, Jordan led us on a biking adventure up to the Bonneville shoreline trail. He ran and pushed Porter in the BOB, I rode my bike with Ellie attached on the train bike, Landon rode his bike, and Owen rode his balance bike (what a trooper!!). And though Jordan helped one or more of us up most of the hills, we sure felt like one tough family! Such a fun little adventure and a perfect way to spend a Spring afternoon. This evening after some play time at the park while Landon had soccer practice, Jordan grilled hamburgers for our dinner and it was just so fun to eat outside again. Happy Spring!
Posted by Debbie Brough at 7:48 PM

Posted by Debbie Brough at 7:43 PM 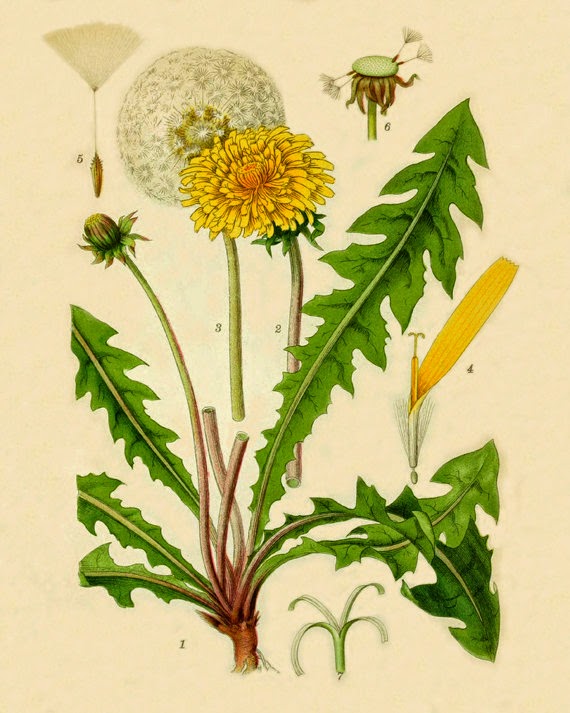 Our little neighbor boys came by to play with Ellie and Owen this morning while we were working in the front yard, and I had this sweet conversation with one of them -

"What are you doing"
"I'm pulling up these dandelion weeds"
"So you can plant some new ones?"
(followed by an explanation of why we don't want dandelions in our lawn…)
"But I just really like dandelions!"

(both Ellie and Owen also seemed confused about why I would want to pull up and throw away so many beautiful flowers!)

Posted by Debbie Brough at 6:09 PM