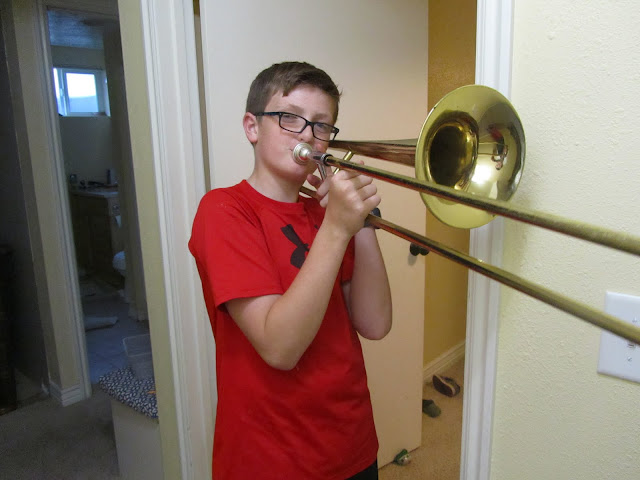 Landon brought his new instrument home yesterday and it was a great celebration at our house! He met us over at the park after school (where Owen was having soccer practice), and was so excited to show us, so he buzzed into the mouthpiece and put his trombone together and put on a little concert-of-first-day-playing-noises for us (and the other park visitors/neighbors). Landon was so great about letting all the other kids in the family try it out, and taught them what to do. Later in the evening, we had a marching band through the house that ended in the basement with Owen doings special claps, and Porter on the metal mixing bowl drum. And it was just such a joyful noise!  I went downstairs to congratulate the performers and Porter asked "Want to join in?!" Such fun. Owen finished his morning jobs before school today in record time so that he could try out the trombone, or even just listen to Landon practice. (And asked last night about saving up to buy his own!) What a fun intro to this new experience for Landon!
Posted by Debbie Brough at 12:35 PM