Starting track (from early this summer) 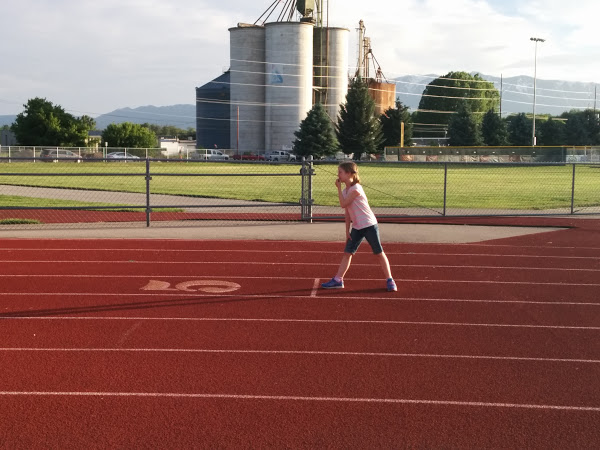 Yesterday I took the kids for their first day of track with Logan's rec club.

Something about the long day, the afternoon fits/fatigue, the new environment (which for me means overly anxious and for the kids means lets run around and be wild and free and explore), the missing naps, the emergency bathroom needs... it was all kind of a disaster and I was just super crazy and frazzled by the end of the two hours.  But, the highlights were:

1. I was too upset to dive into what would have been a typical "Well, what do you think? Was it awesome? Did you love it?" So, the kids kind of on their own just brought out the good parts. And I think if I'd jumped in with all that, they may have just said "eh."  So it was a really happy surprise to see them decide for themselves what they really thought, and to be able to find the good parts without my help!

2. We invited a friend of Ellie's to take Owen's place (since his broken arm meant he couldn't run this season) and she was so super cheerful and excited to be there that Ellie caught on to her enthusiasm. (And having a friend along probably helped temper my evenings's frustration, though I wondered if she might have been thinking something like 'Wow, Ellie I didn't know your mom was so mean!'

So we made it through, and with those two highlights even decided to try to figure out how to make it work instead of just giving up.

And tonight was better!

We had lots of snow today (one week till summer break!) so they moved inside and everybody was just a little more contained which made me feel much better.  I had back-up plans in case of falling apart children,  and I had Landon's sweet prayer from last night in my mind all through the day "Please help Mom feel calm and relaxed..."

The kids were doing so well I even invited Jen to come over and join us with her boys to run around and play for a bit.

So, we survived. And we (I) didn't quit after the first day. And on we go with a fun new activity for these kiddos to try out!

**Update, now that track has long been over. The kids did awesome. There were some tears along the way... I think this was the first time for Ellie when she really pushed as hard as she could at something like this. Once she realized that it was okay to feel so tired/spent/exhausted, and even that she was supposed to feel like that, then she was able to do really great. She still reminds me every once in a while that she did not like track, but I think she also felt pretty proud of herself. Landon was amazing at the track meet - he'd finished all the events he'd signed up for and given his best, and then when friends asked him to do the 1 mile (the hardest event) at the end, he just did it. I loved watching these guys working so hard and doing so well.  Also, reading this now I was reminded of how this was happening during the last weeks of school when life is just hectic, and Jordan was in London for work so I'm not surprised looking back that I felt so frazzled! :)