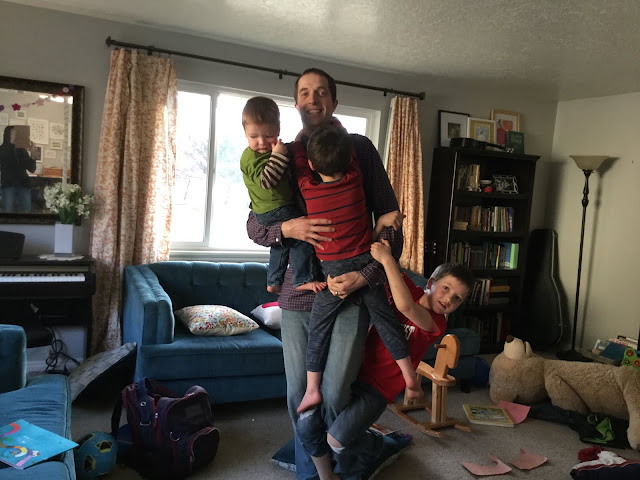 Don't mind the background.. (do other people's living rooms look like this most of the time?) I thought this little moment summed up our January pretty well :) Jordan has had a lot to juggle as we found ourselves jumping back in to job search mode. When we mentioned this to a friend, I loved his response of something like "Well good! That just means there is something even greater in store for you." :)

So, once again (though no major accidents this time around!), our January was full of  searching & discussing, plus applications and interviews (and our February too for at least the next two weeks). But we are feeling really blessed with lots of great possibilities out there. We'll see what comes!

+ A skin cancer scare! I thought I was checking off a 'to do' by visiting the dermatologist about a little spot I'd had on my face, and was kind of shocked when he said it looked very much like basal cell carcinoma and recommended a biopsy right then.  I told him I needed to wait and went home feeling more and more scared as I looked for more info online. Fortunately, Jordan had the good sense to suggest I get a second opinion. Two days of worry later I did, and the doctor was doubtful enough that he brought in another doctor for a 3rd opinion and they both felt confident that it was just a pre-cancerous spot that could be taken care of right then. (Phewph!!) What a relief and also what a scary few days! And I am 100% more committed to sun screen and crazy hats when summertime adventures come.

+ We took the kids to see Wonder (I read this over the summer with Landon so I was especially excited to see it with him.) Reading the book, I was mostly touched by the kindness and sweet interactions between the students. But, in the movie I kept finding myself in tears at the tender feelings of motherhood that they captured so well. I really loved that. I really love being a mom.

+ Kathie was so super wonderful to come up and spend a few days in Salt Lake with us + watching the kids while Jordan and I went to the Silicon Slopes Tech Summit.  I had been watching over the past few months as they'd announce new speakers for the conference and just kept wishing we could find a way to go (yep, I really was that excited about attending a tech conference!) Finally when I heard Mitt Romney was going to be speaking, we called Kathie and just a few days later she was here and ready to play! :) The conference was really fun -- great to see and hear from (in person) a lot of people I've read about for a long time, and it was just a fun time to spend with Jordan too!

+ Landon and Owen started basketball and I've loved going to watch them play (while Jordan so kindly watches the kids at home -- we learned Isaac isn't yet excited about sitting and watching a basketball game as much as running around new interesting places :)

+ Jordan and Landon have started an early, early morning exercise plan. It's not every day, but frequently they'll get up (before their early morning scripture study) and do weight lifting, go swimming, to the climbing gym, jump roping, etc.)

+ We celebrated Ellie's birthday with a 'blueberry birthday party' planned and prepped by Ellie (with some help :) I just took all the 'blueberries' off our kitchen wall last night to make room for Valentine hearts, and was almost kind of sad because they were a very cheery decoration for the month!

+ Oh my goodness, we have had such beautiful days! I feel like I often tell people how much I love Logan "except in January". But this year, our January felt like March. Very few yucky air days. I don't think we ever went below 0 (hardly even any single digits that I can think of!) It was just so warm (not like 70's, but like 30's!) and lovely. What a blessing!