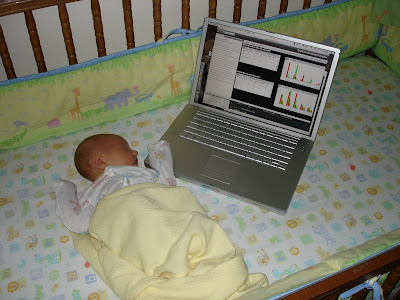 Landon hard at work -- about 5 days old :)
We have been amazed at how normal any kind of technology is for Landon. A videochat with Daddy mid-air on Jordan's way to New York - nothing strange about that. Playing music throughout the house from our computer with the airport express - that's just how things work. ipod touch screens or Jordan's android are easily enough maneuvered, unlocked, phone calls made... playing super nintendo in the van on the road trip to California - haven't all kids always had such great entertainment? So far the only time I've seen Landon amazed at technology was when he got to play a Clifford game on the computer which made a cool little picture and he was able to print it. Printing? Amazing!
(Ellie has caught on pretty quickly too. We skyped with April on Christmas morning while we all opened presents together - the next day someone asked 'where's April?' and Ellie answered quickly "In the computer!")
This morning, Kathie was talking to her Dad on the phone and let Landon say hello to Great Grandpa. She passed him the phone with something like "Do you want to talk to Great Grandpa?" to which Landon responded with a bit of surprise. "Is he in heaven?" Apparently no distance is too great in Landon's mind for a cell phone to reach. :)
Posted by Debbie Brough at 11:44 AM