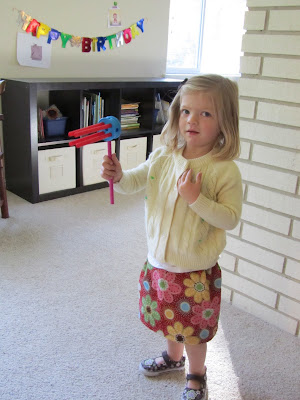 Ellie has been carrying around these tinkertoys for the past few days searching for bad guys. "Let's go fight some bad guys!" she says. Or, "I'm the person who shoots the bad guys -- follow me!" Then we march through the house with Ellie's sing-song voice sending out commands -- "Oh! I see a little tiny mean guy on the fireplace! I will shoot the mean guys with my shooter thing!" Then off we go again "March, Mommy!" she calls then down the stairs with Ellie singing "We're looking for some mean guys... we're looking for some mean guys... and we will fight the mean guys..."
I think if it wasn't so funny to hear sweet little Ellie in search of the ever elusive bad guys I would probably work harder to encourage some different kind of play :) (It's all the sillier because she has no idea what shooting actually is -- the roughest she's gotten was to gently sweep an imaginary mean guy off of a seat chair. Otherwise we 'fight' the mean guys by saying 'go away mean guys!' or more often something like 'please will you go away mean guys?')
And some side notes --
One evening last week Jordan went online to look for some more tinkertoys to add to the kids' collection. He was pretty tired and amid the commotion of getting the kids to bed and other distractions, he forgot how ebay works and ended up bidding on 4 sets. Sadly (for him) but happily for the kids, he won three of the bids so we will have a lifetime supply of tinker toys at our house!
I made Ellie's cute skirt with my freshly serviced and repaired sewing machine! I hadn't realized how often I was using it until I had to go almost a week without it while it was at the repair shop. And oh it sounds so smooth and beautiful now without all of the crazy noises it was making! (I guess you are supposed to have your machine serviced more frequently than 7 years or so...)
Jordan just now took down that Happy Birthday banner (from the picture above). It has been on our front room wall since Landon's birthday (in July!) Time for some new decorations I suppose :)
Posted by Debbie Brough at 7:56 PM