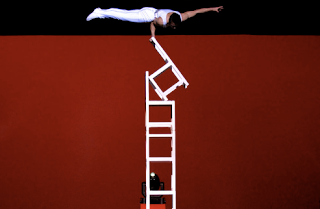 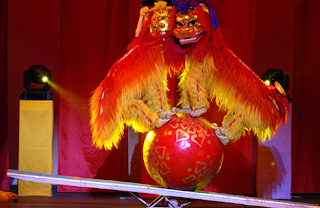 Last weekend Jordan and I went to a show for this group - the Shangri-la Chinese Acrobats. Nathan had gotten tickets but then couldn't go at the last minute so he offered to watch Landon while we had a fun date night. These guys were amazing! It was a combination of ballet, gymnastics, martial arts, juggling, balancing, and just some really cool tricks! :) Some of the contortionist stuff was kind of hard to watch -- peoples bodies just aren't made to bend in those ways! But overall it was a really fun show and amazing to see how much work had gone into developing their talents.

Nathan, in the meantime was completing his own major feat -- putting Landon to bed. We got home about 9:45 and Landon had finally gone to sleep about 15 minutes before (after an hour and a half of creative efforts...) "Thanks for coming in quietly" Nathan said. :) Lucky Landon convinced Uncle Nathan that he'd go to bed if he could just have his duckies -- 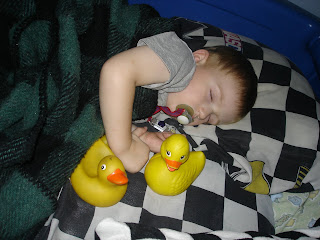 Posted by Debbie Brough at 3:30 PM