Sweet and funny things to remember from Landon 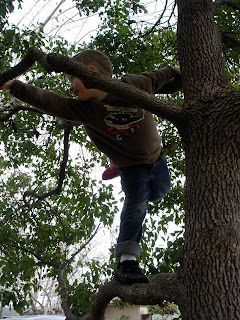 "You're the best Mommy in the whole world!"
Jordan suggested that Landon was ready to learn to ride a bike, since he just figured out the motion to ride his tricycle. I said something to discourage the idea till he was a little older, so Jordan asked Landon if he wanted to learn to ride a bike, and Landon responded something like, "Um, yeah! I'll try!"
But, unfortunately for Jordan's intentions, Landon had been listening to closely to Mommy. So later when Jordan was ready to go and ride with him, Landon said "Maybe when I'm older... um, maybe when I'm dying." (He recently learned that people die when they get really, really old).
It came up that we might move someday, and a little later Landon said, "But I love Provo! I want to live in Provo forever!!" (And in response to what he loves about Provo -- Macey's, Carl's Jr. (playplace), and Wendy's)
His latest thing is getting into some funny position (hands down on the floor, one foot down and one sticking up in the air or something) and showing it off to us "Did you know I could do this?!?"
Landon trusts his Mommy so. Whenever he's unsure of something he checks in with me to see what the real deal is (pressure for me!) At the airport, he was playing with a few boys, and one asked if he was 3 1/2. "I will go and ask my Mommy if I am three and a half" "Am I 3 1/2?" "Mommy says I am three and a half!!"
Tonight I was standing on the edge of our couch and reaching over to our bookshelf to put a few books away (with one foot up on the mantle to steady myself...yes, I should have just grabbed a chair.)
Landon, watching, said "That's a really amazing trick you're doing their Mommy!" and later "That was a really cool trick you were doing, but you're not supposed to stand on the couch. You told me that rule to not stand on the couch, so you shouldn't do it either."
Posted by Debbie Brough at 11:34 AM