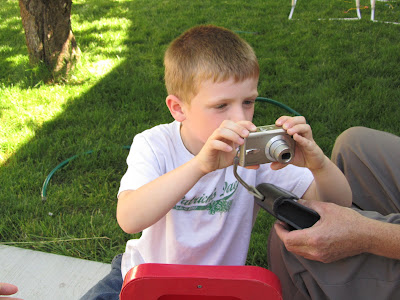 Landon's getting super excited for his birthday. Counting down the days for the past few weeks, letting everyone he meets know that he will turn 5 "in July 27th", passing out birthday party invitations to his friends. But, now that it is getting closer he's starting to feel (as he says) "also a little sad... It's hard to turn five when I really like being four!" It seems like Landon has always had a bit of an identity crisis around his birthdays since his age is so much of who he is --' Landon Brough 4-years-old' (or "I'm not three!! I'm two!!")
Posted by Debbie Brough at 9:51 AM