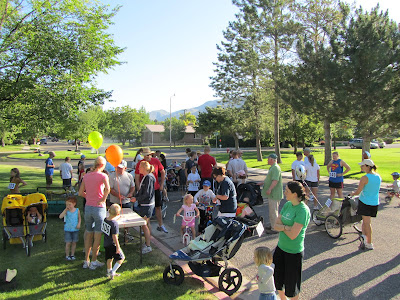 As part of the Pioneer Day celebration, our ward had a "Pioneer Haul" 1- mile fun run. It was really great. They had bib numbers, an aid station (with water and fruit snacks :), posters set up along the way, designated cheerleaders and finishing prizes. Such fun! 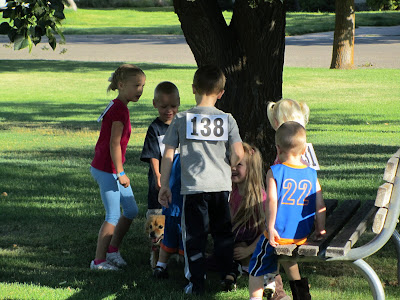 Landon, filling in the troops on pre-race strategies 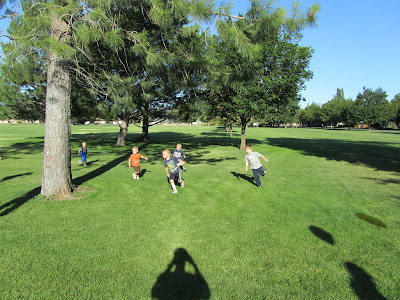 Side note: Landon and I had a short race the other day when we were at the Provo track - I was pushing Ellie and Owen (so I did have a slight disadvantage), but it was a very close finish. I decided if my 4-year-old is running as fast as me, it's time to really get working!
Also, Landon is an incredible biker. He went along on a run w/ Jordan and April at the beginning of the summer and biked the first 5 miles with them (!!) We have a major hill between our house and the main part of Logan, which I've never been able to bike all the way up without Jordan helping push me from behind (and even then it is still killer). Landon can do it. On his little bike w/ no gears to shift down and just a few 'turbo-boosts' from Dad. Wow!
I've been much more focused in exercising these days (running most mornings!) If I want to keep up with this little guy, I'm going to need to be one tough Mom!
Posted by Debbie Brough at 11:42 AM