Landon has been working on his 'Gordon chart' since his birthday (in July) and finally finished it! He got one mark (= 1 penny) for every dish that he did. Four months later, he got to buy Gordon. Here's the proud helper --> 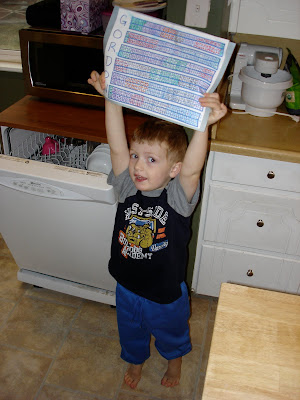 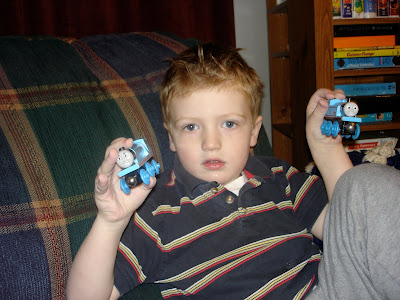 And he had a HUGE accomplishment this last month -- he gave up his binky!!! I thought this would never be possible, but we lost it in Logan and he managed to sleep without it that night (amazing!), so we continued with it and he is binky-free now. Wow!
(I put off ever taking away Landon's bink because it was the one time when he would/could be really calm - he'd take breaks during the day to go lay on his bed w/ his binky and 'sleep', but now he's without that one calming thing... I'd thought at least he'd still have his soft blue blanket to 'pull fuzz', but apparently, that went along with binky use to him because his room is now fuzz free too!) 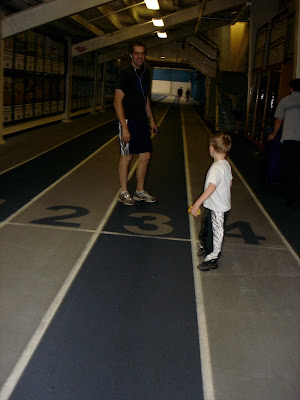 Landon's been having fun running with us at the track (my batteries died before I could get a great picture...) He sure is one tough little kiddo!
("I sure love you Billy!") 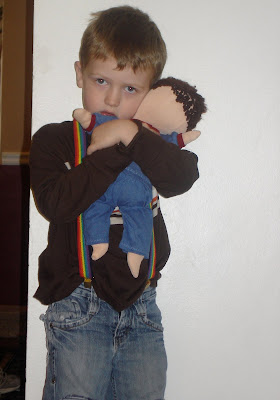 Landon loves to have friends. Today at church, he came with me to the end of primary and happily sat talking with one of the other presidency women while I conducted (with an occasional not-too-quiet "And what's next Mommy?"). As soon as it was over, he ran into the throng of kids and grabbed the first little boy he saw to tell him "My shoes are matching with Daddy's!" On the way home he yelled hello to everyone who passed, and when he saw Emma (one of my past piano students) run by w/ a friend, he tried to catch up with an "Emma wait!", then walked back to us shoulders slumped saying, "I was too late Mommy! I was too late!"
He loves to go to playgroup and see Josh and Jackson and has a great time playing with Josh while Jordan watches the boys and Ellie on Saturday mornings during Yoga.
He is one determined little boy -- one of our favorite things was him saying in response to Jordan's observation "I am NOT assertive!" :)
Landon loves to dance, 'play and play and play', help cook, watch his favorite movies, run, climb on the stairs, play with Ellie "I say silly words to Ellie and she laughs!"...
What a wonderful little boy we've got!