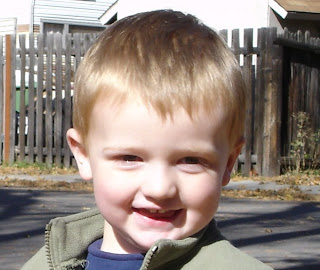 This little kiddo is getting such a funny sense of humor. He loves to be silly and make jokes by filling in the blanks of phrases he knows with random words. It started with the ABC's (His favorite song -- we here this all day, every day because every other song he sings is also sung to this tune "I no take a nap I no take a nap I no take a nap nap..." or driving in the car, "cars and mountains, sign , store, big truck, big truck tree-ees")
But he loves to sing something like this " a b c d e f.... V! Veeeee?!? That's silly!" then he laughs and starts again "a b c d e f... car!" etc. :) Lately at night when we say the 'rules of the new bed', he loves to fill in the blanks at the end instead of 'self', it's "Go to sleep all by my big... Wall!!! All by my big... puzzle! All by my big... Mommy!"
Funny kiddo! :)

Yesterday, Landon wanted to go and play outside and I told him that was fine, but he'd have to play all by his big self because Daddy was working. He came in a few minutes later saying "You want to play with me Mommy?" before I could tell him I was still finishing my chores, he asked "You want to be my friend?" You just can't say no to that!! So I went outside and asked if Jordan had sent him in to say that - he hadn't but apparently Landon had been causing more mischief because when I'd sent him out originally, he'd gone right outside and told Jordan "Mommy says stop working!" This boy loves to play with his Mommy and Daddy!
Posted by Debbie Brough at 9:05 PM