Just as a disclaimer: this is not a complaining post! These are just the funny stories of things that didn't go quite right and made our trip more memorable :)

Our apartment in São Paulo had a glass top cover over the gas burners on the stove.  One evening, we were heating some chicken nuggets/french fries for dinner, and we'd gotten creative with stove top cooking since we didn't have any oven-safe dishes. I had a pan full of french fries heating on the stove when I started to smell something funny and see smoke from behind it... And suddenly I realized I'd forgotten to lift the glass cover! We quickly turned it off and lifted it up off the heat of the burner, but a moment later as we were turned away we heard a crash and the entire glass top had somehow exploded or just crashed with bits of pieces all over the kitchen. Yikes!
(no one was hurt and Jordan was amazing and helped clean up all the glass, and the hotel was super nice and charged much less than we'd expected to repair it. phewph!)

Street Robbery (but not really)

We were very cautious/careful as we made plans for where to stay and where to visit. And we felt very safe almost everywhere we went. Still, we returned from our day trip to Rio to hear the report on how the day had been for Kathie and Winslow with the little boys and heard that Owen had been robbed! (well sort of :) As well as I remember --

They'd ventured out to the supermarket near out hotel with the boys and stopped for ice cream on the way. As they neared the market, a homeless man was asking for money and getting more persistent and upset. He got frustrated that they wouldn't give him anything and finally reached out and took Owen's ice cream (!) The market's security guards came over and he returned Owen's ice cream before he was escorted away from the market.

Sweet Landon heard the story and said  "I think Heavenly Father sent those guards to protect them so nothing worse would have happened."  We tried to ask Owen about it, but he always just answered happily something like, "It was okay, he gave me my ice cream  back"

I had a hard time with the transition from São Paulo to Florianopolis. With our flight schedule that day I'd missed lunch (which is a big deal for me!) and was overwhelmed with a funny smell in our (otherwise beautiful!) house and I don't know what but I was just having a hard day. When I went to unpack, one of our bottles had spilled and everything in that suitcase was covered with (sweet smelling!) sticky soap. (Which, obviously is not a big deal!) But, it felt like a big deal on a hard day. Isn't it crazy that we can have hard days when their is really nothing hard even happening? (A vacation in paradise, on an island with 42 beaches? And I was crying about a soapy suitcase?)

One evening we were playing games (I think) at our house in Florianopolis and a bat flew through the room! There were a few places in the house that had gaps where windows should have been and it must have just come in that way. Jordan and Winslow bravely searched but he had happily left before they found him. 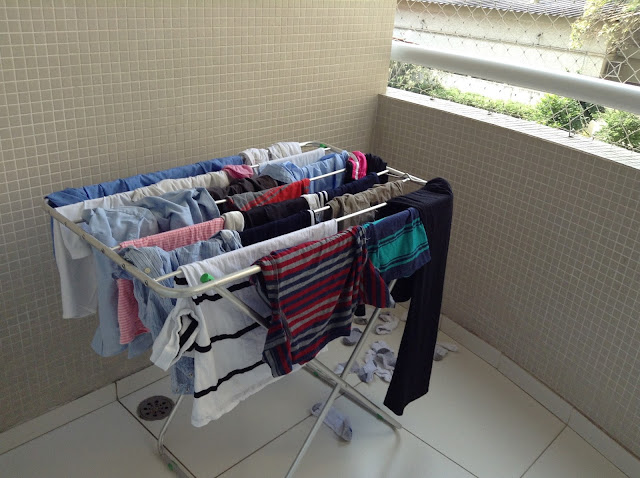 We were lucky to have washers in both apartments, but had some trouble with dryers and travelled home with a decent pile of still-wet clothes. In São Paulo our washer was a washer/dryer in one. You put all the clothes in, set the timer (for about 4 hours) and it would wash then dry the clothes all in the same place. Except, that it didn't really dry them so much. When I tried (in my not so excellent Portuguese) to ask the housekeeper if there was something we needed to do differently to help the clothes dry better, she brought me a drying rack to set up on the balcony. :) In Florianopolis we had drying lines, but with the humidity, things didn't ever really get totally dry (although, I never had any trouble with wrinkles in my t-shirts so that was a definite plus!)

We flew back to São Paulo the day before our flight home, so we had a little extra time to do some last fun things. We stayed in a hotel out by the airport and April and I planned a trip to visit the Serpentarium with Landon that we'd missed while we were in the city before. The metro/buses looked too long to be worth the time so we got a taxi (which we'd done several times before during our trip) and headed out. It wasn't long before both April and I were getting nervous, watching the trip meter rising and rising and rising... by the time we got to the museum, the trip cost shown was about triple what we had anticipated. Then we were told another 50% would be added on because we'd crossed city boundaries (!!!) The museum workers at our drop off spot confirmed that as a normal fee, so we paid and then dreaded the trip back with another crazy expensive taxi ride! (The museum was a great deal though with entrance for about $2!) 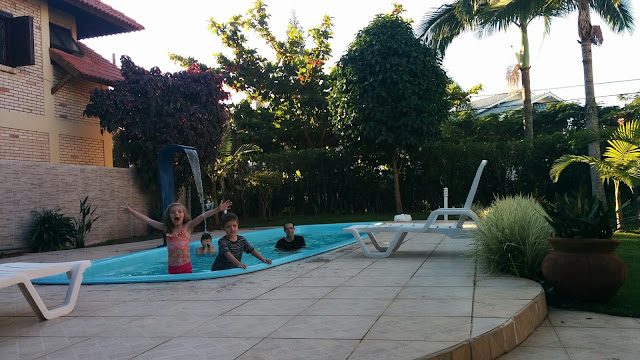 The kids loved the front yard pool in Florianopolis. We'd come back from a day at the beach and they'd jump in the pool for even more water fun. Having an open pool meant we did have to keep extra good track of the kids, but they did amazingly well. Just once while we were all outside, Porter was walking around the edge of the pool when he lost his footing and fell in. Without thinking, I jumped in (fully clothed) but as I tripped on the pools steps, Landon who was swimming and playing right by the fall calmly stepped over and pulled Porter out. Even though I got some soggy clothes,  I was so happy that was our only pool mishap!

The owners of the Florianopolis house were super nice. One afternoon, they offered to lend us their kayak for a trip to the beach. We picked it up and walked the block from their home to nearby Daniela Beach. Before we got settled, Landon (running in the waves along the shore) pointed to the sand, showing Jordan, "Look Dad! A jelly fish!" "No, that's just some seaweed..."  Jordan answered as he picked it up to toss it aside.
But, when the seaweed clung to him as he tried to pull it off his hand,  and then left his hand stinging more and more and more... he realized it really had been a jellyfish! A fisherman nearby came over a few minutes later with the warning of "água-viva" or 'live -water' (which is their name for jelly fish -- a perfect name because these looked like just see-through little blobs that you'd hardly notice in the water). We found a few more, and ended our beach trip short that day!

Things that didn't happen that I worried would happen

I am an expert worrier. And maybe one benefit of worrying so much is that when everything turns out okay, it is such a relief (that's not true, it's not worth it! I'd much rather not worry in the first place !  :)

Most of all, we were grateful that Landon did not get lost! (Or any of our other children, he was just the most likely candidate for getting distracted and wandering a little too far)

Also, we didn't get sick! We've had a history for crazy sickness when we get together so we felt so lucky to stay healthy and not have any trouble with new foods either.

And we were safe and happy and didn't get lost or hurt or any of the other many circumstances I'd imagined might happen! Hooray for a wonderful time (and some imperfect stories to remember too :)