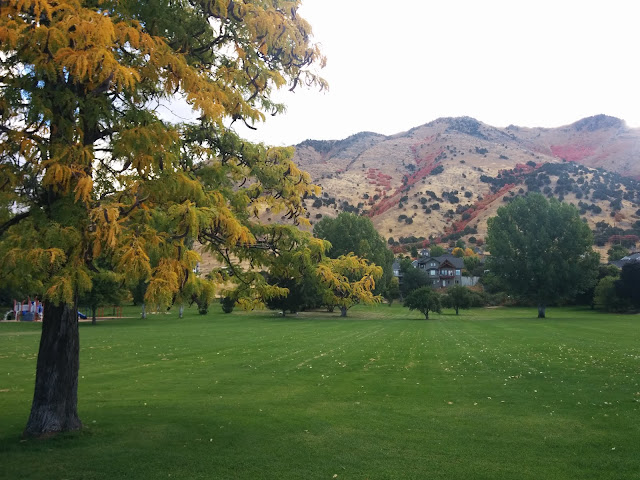 Every day we walk by this row of trees at the park that drops long brown seed pods the kids love to collect. Earlier this summer, they were collecting the brown and the newer green pods and opening them up to compare the seeds inside - dried up and brown or soft and green.

A few weeks ago, Porter ran inside from our back yard "Mom! You have to see something!!"  And right up in the tree next to Jordan's office, there was one of those long green seed pods growing from the tree! At first I thought he must have brought one home from the park and hooked it on somehow, but sure enough it was growing from the tree. And that may not sound so strange, but it felt like looking up at an apple tree and seeing an orange growing or something. Porter took a turn to show everyone else in the family and they were all just as surprised as me.

I started to do some research to figure out how this tree could be growing one of those seed pods. So crazy! First I learned that the tree by Jordan's office was a honey locust tree. And then I learned that the trees by the park were... honey locust trees. And... they look just exactly the same. They're the same tree -- this should not have been a crazy surprise! Ours is a thornless honeylocust with no seed pods (except one, this year!) and the ones at the park have seed pods. I've looked at our tree several times a day, and I could have described the leaves without them in front of me. But I had never actually looked beyond the seed pods at the park trees!

As soon as I learned the name of these trees though, I also realized that there are so many honey locust trees in Logan! We have two in our yard (I did know that, even before I could name them) A full row at the park, and several more all through our neighborhood. They line the main streets downtown. They are all over, and I'd never noticed until they had a name.

Several years ago, we did a little bird unit for our at home preschool time, and I learned for the first time what a robin was (obviously, I have some gaps in my everyday knowledge!) and what a magpie was. And suddenly our neighborhood was full of those two birds. (Not suddenly, obviously. We have so many magpies that our neighbor makes it a hobby to thin their population in our neighborhood, and I don't think they just appeared when I learned their name :)

For a long time, I've wanted to learn more about flowers - and I'm thinking right now about how magical it might feel if I can just learn their names and then I'll suddenly see them appearing all around! (I'll just have to be sure to study them seasonally so I don't try to find daffodils in November :)