Let me take you to Rio! Brazil Part 12

We almost didn't go to Rio - We were super late making up our minds about our day trip there, and prices had gone up on airfare. But at the last minute (practically) we decided to just go for it, and I'm so happy we did. We had a busy, happy day trip and loved what we got to see and do! 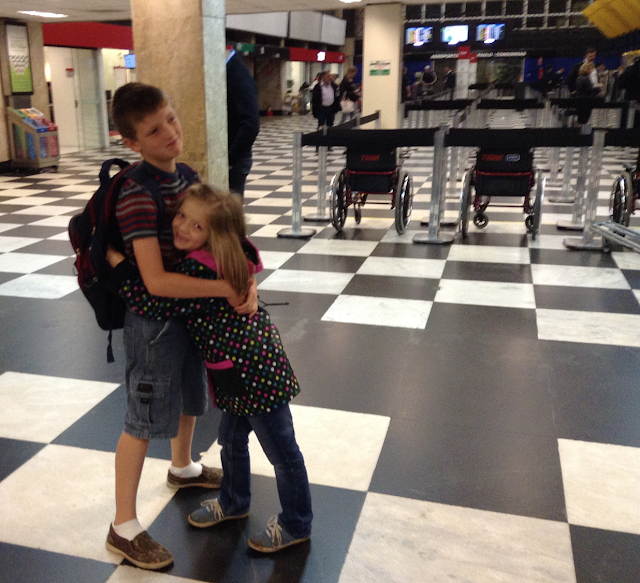 April, Jordan and I took Landon and Ellie and we flew in to Rio on a morning flight from São Paulo. (Super cool thing: we'd left ourselves plenty of time by getting to the airport quite early. As we were finishing our check in, we had the option to just take an earlier flight rather than waiting for another 1 1/2 hours until our scheduled one - awesome! The same thing happened on our return trip home - we got there early that evening, just in case, and ended up moving up to an earlier flight than we had scheduled - hooray for flexible airports!) 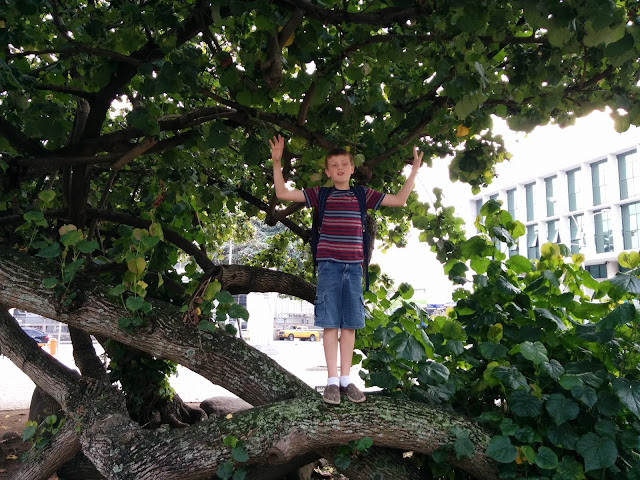 We got to Rio and let the kids climb and play in the trees and rocks just outside while we planned our route to the nearest bus stop.

While we were in Brazil, Jordan and April used google maps to figure out which buses to get and where. So we caught our bus and got a little mini-tour of the city on our way to our first stop - Copacabana beach! 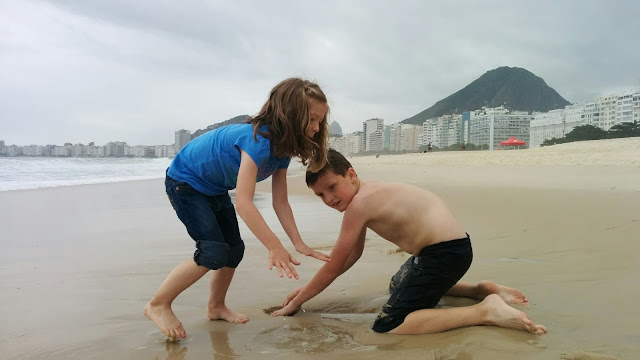 And oh, it was beautiful! I just loved the amazing mix of skyscrapers, mountains, sand and ocean. These kids had fun splashing and digging and building. 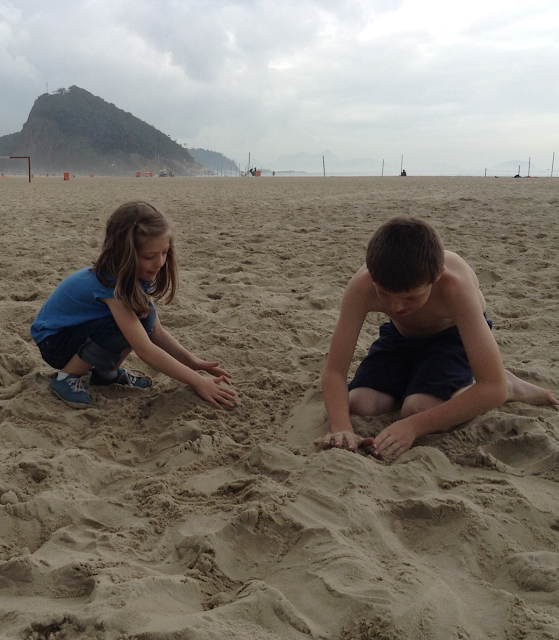 I hadn't thought ahead about stopping at the beach (or dressed/packed for it), so I just sat back and happily watched and enjoyed the amazing views. 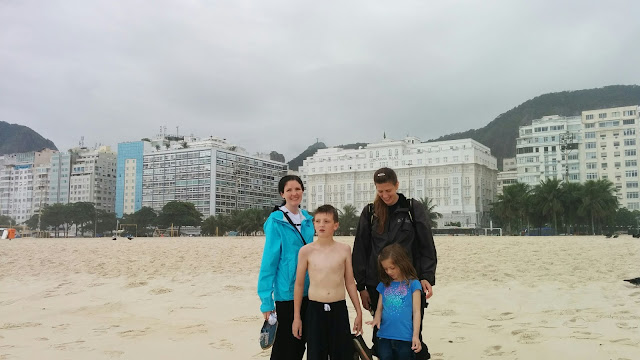 The last few years, we've watched the fireworks on Copacabana beach for New Year's Eve (since Brazil is a few hours ahead of us, and an early new year celebration is just right for us right now :)
And the craziest bit of our trip for me was just realizing we were there -- in that same spot where we'd watched the enormous crowds celebrating for the past few years, across the world from us -- and we were right there in that spot - we were really having this great adventure! 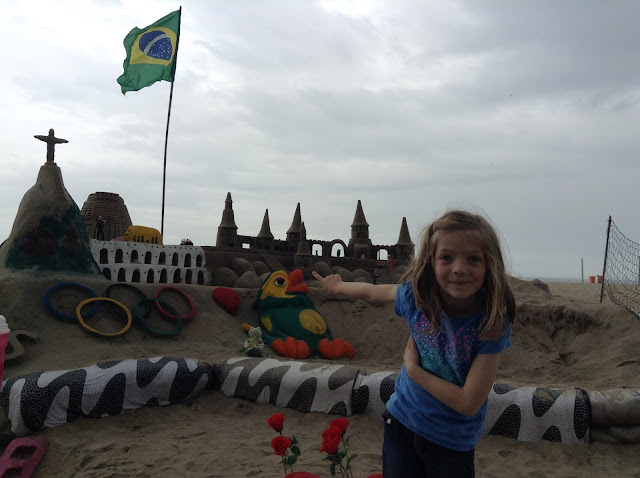 Along the beach, there were several of these giant, detailed sandcastles. Only after we'd seen a few of them did we realize maybe they were wood castles+sand, but they were still fun to look at :) 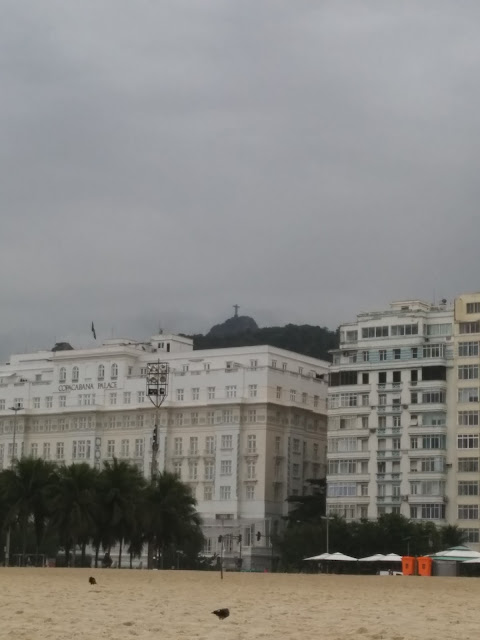 We were eating at Gaucho Grill one day (before we'd really gotten serious about taking our trip) and Ellie saw a view of the Christ the Redeemer Statue on their big tv screen up on the wall, and said  "I want to go there!" And though we didn't take the ride up to the statue itself, we caught little glimpses of it throughout our day in the city.  (Like just barely up above that "Copacabana Palace" building above) 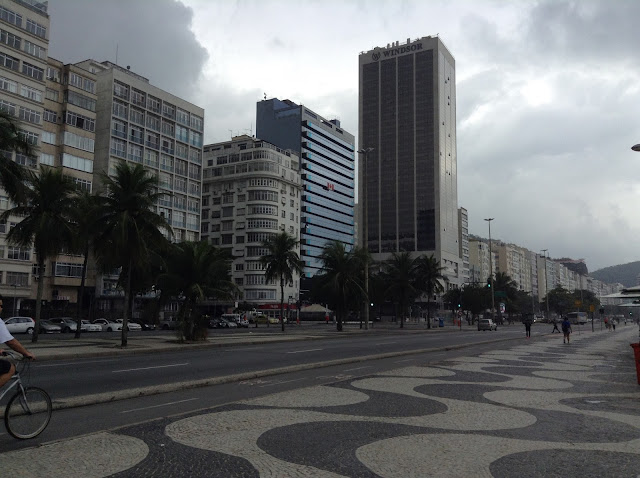 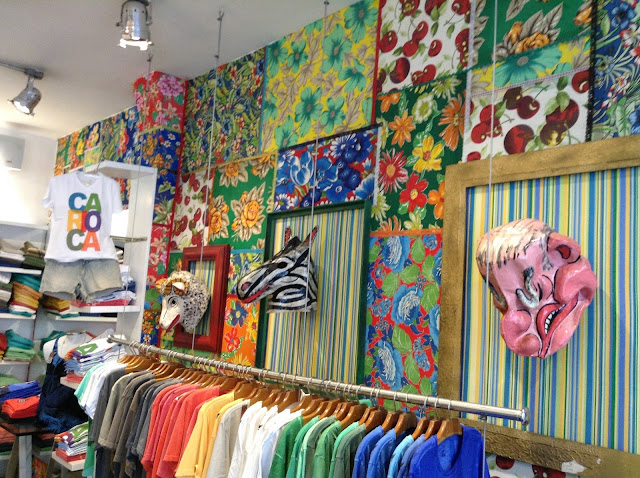 We stopped to grab some flipflops for Landon (who had very soggy shoes...) And also stepped inside this fun t-shirt store with the coolest fabric wall-papering (I'm still trying to figure out a place we could do this in our home, because I just loved it so!) 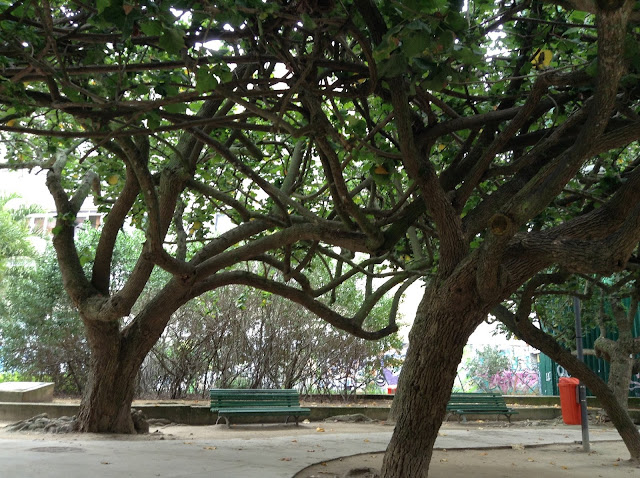 Then a quick stop at "The Girl from Ipanema" park 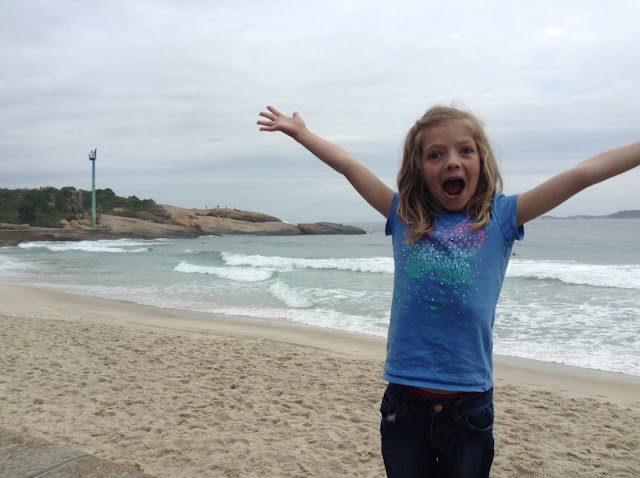 And a short stay at Ipanema Beach (here's our own little girl from Ipanema :) Oh, so beautiful! 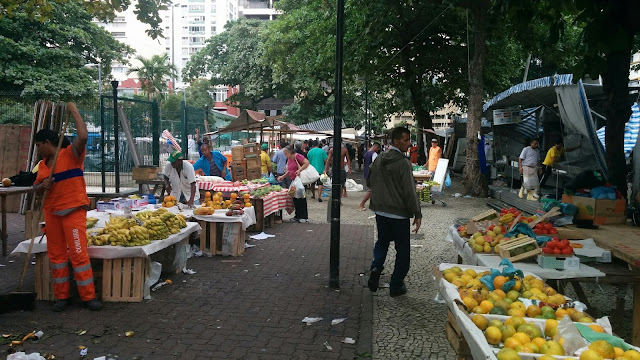 We started our search for lunch, and saw a 'farmers market' that we stepped in to explore. But we quickly made our way back out - the market had just ended and all of the booths were closing up -- and it was pretty crazy and chaotic (and smelly with lots of fish/fish parts still awaiting clean up...) 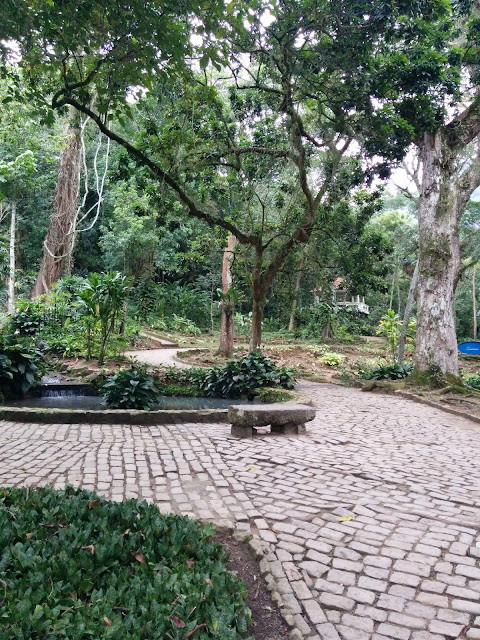 So on we went to our last stop at the Botanical Garden. And it was just amazing. 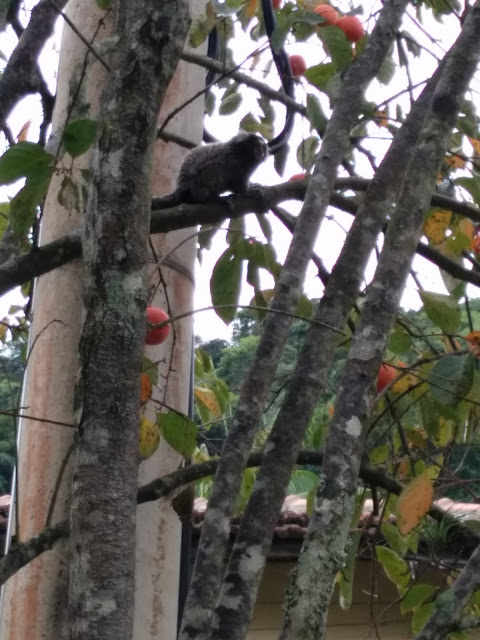 We saw this little guy and his monkey friends climbing in a tree near the entrance. 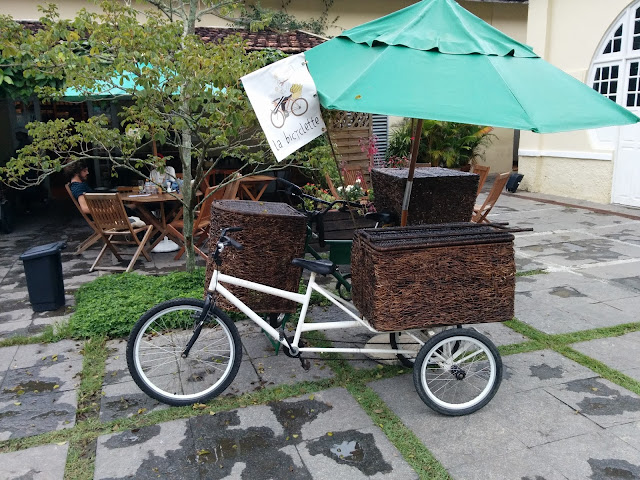 And stopped for a late lunch at the garden's restaurant - a great little French Cafe. 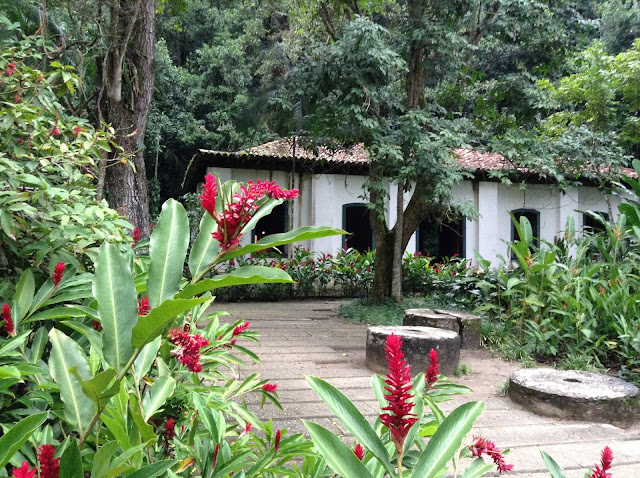 And then exploring! Such an incredibly beautiful place. The wildness of the rainforest with the earthy trails and the bright exotic flowers... 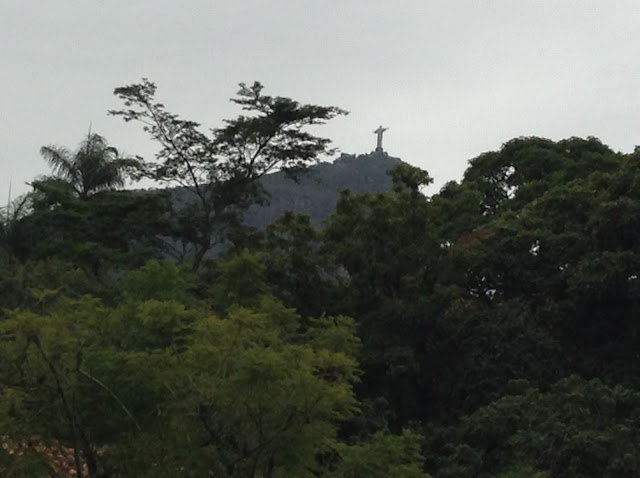 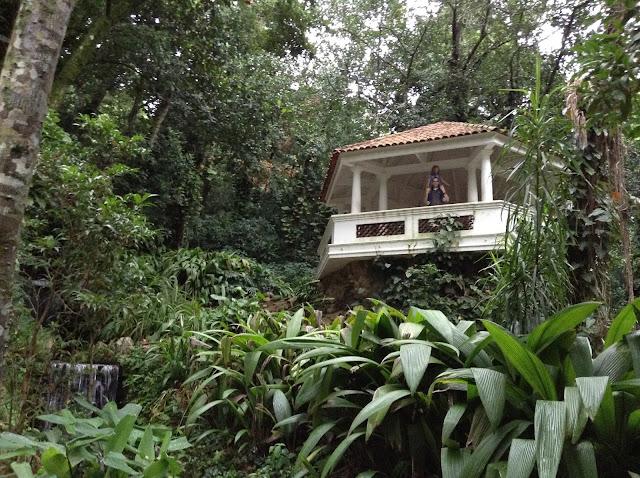 And we can chill in my gazebo, gazebo... 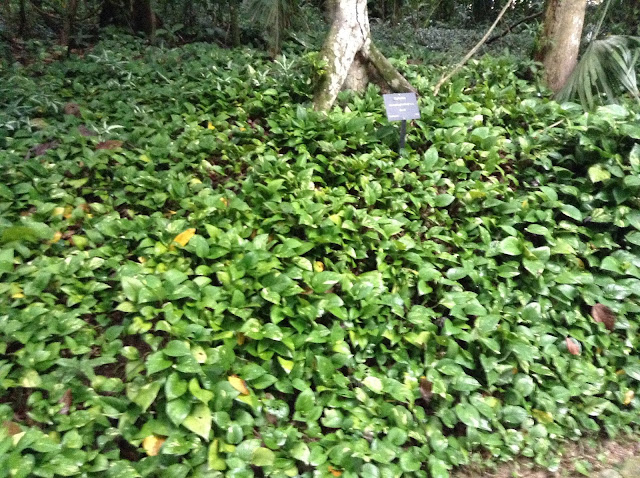 That philodendron! This is my favorite inside plant because it is super, amazingly resilient -- but I never imagined what it would look like in the real world! (We saw several other familiar plants - only wild and enormous and happily growing in every which way instead of carefully placed in a little pot on the counter) 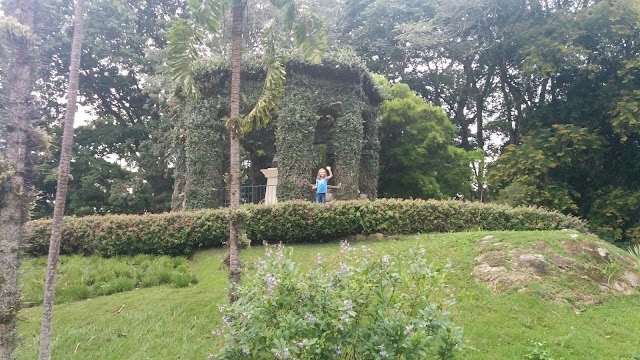 And another gazebo - the song is true! :) 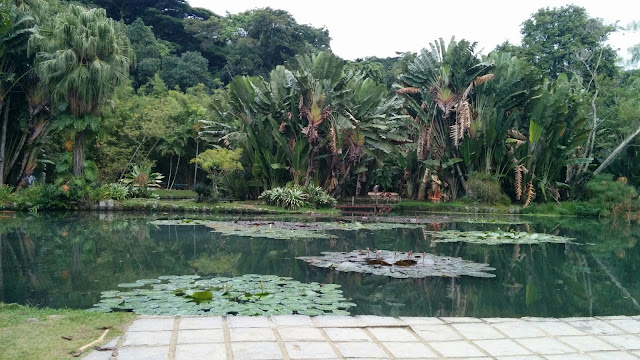 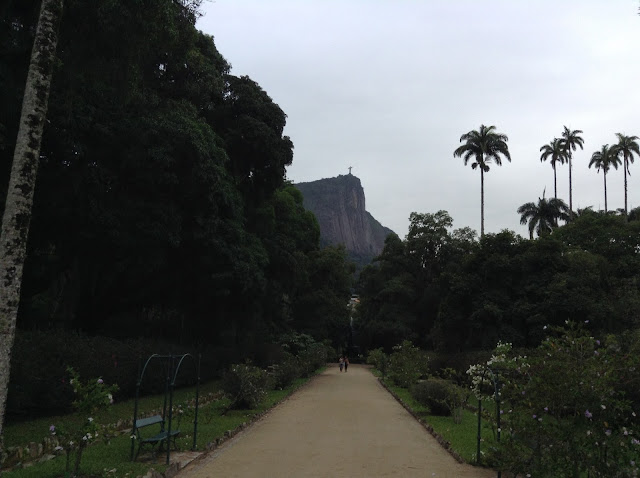 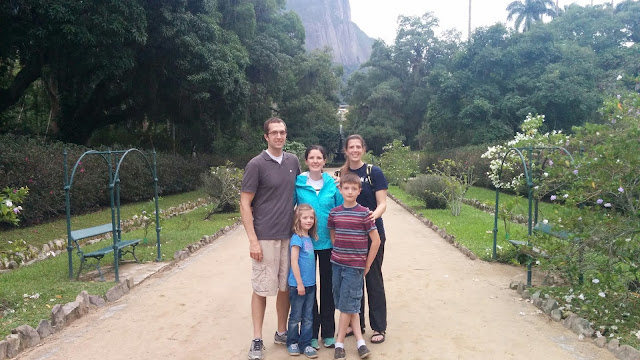 I don't know if I've ever been in a more beautiful place, really. What a delight! But, as our last stop, we finally had to hurry ourselves out to make it back to the airport. 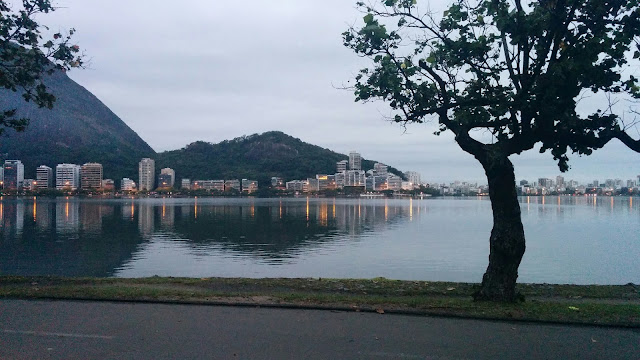 We bartered for a good taxi fare and the driver (eager for the work) agreed to take us on a little detour past the lake on the way to the airport. And what a view. Again, such stunning contrasts -  Those mountains! That skyline! The beautiful lake! And all mixed together, what a beautiful place.