The Skunk (a fun new book + facing a fear) 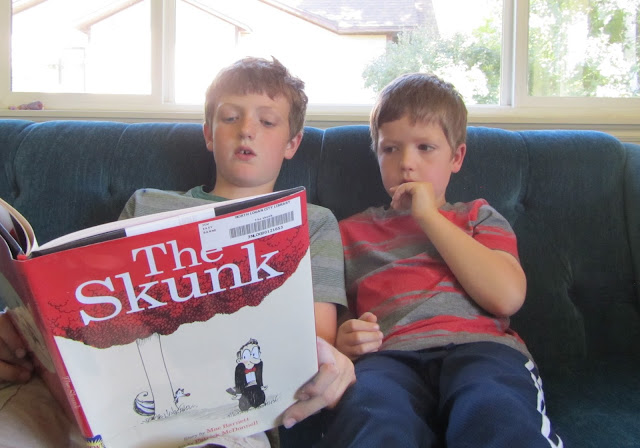 So, for several months Owen was/has been afraid of skunks. I think it must have started with a Wild Kratts episode, because we haven't had any in-person skunk encounters to get him worried. But it was a serious thing.

For a few months (or at least it felt that way... any memory of middle of the night issues are always a little fuzzy...) Owen would wake up several nights a week in the middle of the night, jump out of bed and race out into the hall calling for Mom or Dad. "I thought I saw a skunk!"

(a side note: I'm sad when my children have nightmares. But I'm grateful that the scariest thing Owen can imagine, even in his sleep, is a skunk!)

No amount of reassuring or logical explanations seemed to help much. But then... we found this book!

We had just read and loved Sam and Dave Dig a Hole by Mac Barnett. I saw this at the library with the new books, and the fun cover illustration plus new favorite author caught my attention. Then, I thought - will this be traumatic for Owen? Or will he love it? And will it maybe help with the skunk fear?

I sat down with Owen at the library and told him I found a book that looks super fun. It's a silly book about an animal that you sometimes feel scared about - do you have a guess? (A skunk?)

A man finds a skunk on his doorstep, and the skunk follows him around his daily activities until the man finally sneaks away to find a new house and new friends. But then he starts to worry about his little skunk friend and in the end the roles have switched. The story is so fun and silly and the illustrations are wonderful.

We read this over and over (though maybe not quite as much as Sam and Dave dig a hole -- you should read that too, it's very cute!)

And, hip hip hooray! Owen has been hugely less worried about skunks. Maybe the book and maybe just more talking about it and maybe he's four years old and these stages just pass quickly :)
Posted by Debbie Brough at 11:40 AM