As we were making plans for things to do in London, I loved the ideas from Janssen at everydayreading, who lived in London for a few months with her little family.  After reading about the Diana Memorial playground, I was super excited to visit with the kids! I showed Owen pictures before we left, so he especially shared in my excitement about the pirate ship park.  And it really was a very fun playground. 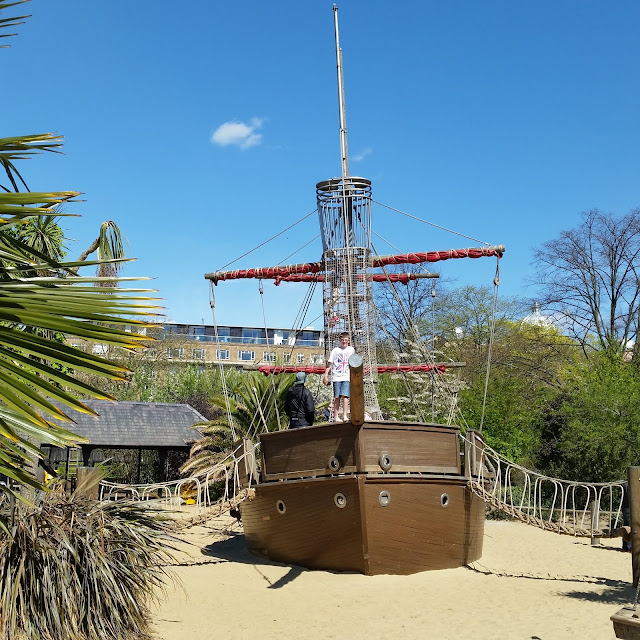 An added bonus: we picked up a great lunch + ice cream at the park cafe. I ordered a kids meal and it was probably my favorite London meal of all -- yummy flat bread pizza, fresh fruit & some super yummy fresh squeezed orange juice (at a park cafe!) Plus delicious strawberry ice cream that tasted like homemade - yum!

The kids had been working to earn an ice cream treat and were excited to get that reward, but the park was just so fun that a few of them even said, "I guess I wish we didn't get ice cream because then we could have had just a little more time to play pirates!" 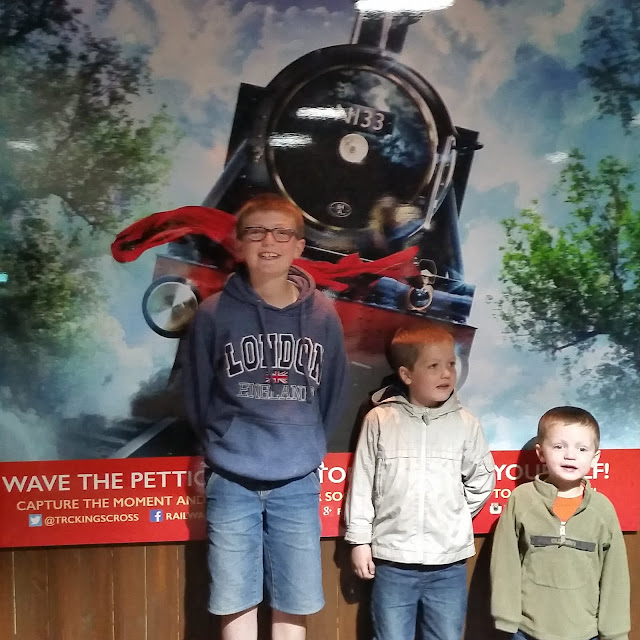 After our pirate adventures, we were off to Kings Cross Theatre for a really fun show - The Railway Children. The theater was built just for this show, and it was fantastic. It had the feel of the Hale Center Theater, except instead of the circle stage in the middle, the stage in the center was made up of various platforms running along a track that moved in and out as the settings changed (or to make room for the real steam engine coming in!) The theater wasn't very full, so they moved our tickets to the front row which was so fun! It was a small theater anyway but front row was even better, plus as the actors mingled before the show and during intermission, a few stopped to visit with us and with the kids and that made it even more special :)


(A funny thing about the show: we all thought it was an adaptation of the box car children... so as the show continued and the mother and father were still very much a part of the storyline, we kept wondering when the terrible tragedy was going to strike leaving the children orphaned! Finally, at half time we reviewed our programs and found it was an entirely different story, so then we could relax a bit about all that!)

Since we were right there, we stopped by Kings Cross station and Harry Potter's Platform 9 3/4 --


We stopped for dinner at the closest restaurants before heading home -- a sushi bar and a "California Burritos and Tacos" place (funny to visit in London :) Every once in a while, I had a hard time understanding the accent of store clerks or waiters and this was one of those -- I was already ordering a little funny trying to pick out what the kids were most likely to eat. And then the woman at the counter (think Cafe Rio) had to ask about 5 times if I wanted "corn or flour" tortillas  (and I just kept thinking, I'm sure she's not asking if I want cauliflower, but what could she be asking?)

Jordan found a fun new treat for us to all share for dessert -- Dorayakis!

I had just watched a Japanese movie all about a dorayaki baker on the flight, so it was fun to get to try this new-to-us treat! (Kind of a pancake sandwich with delicious creamy strawberry/chocolate filling -- much more delicious than the traditional red bean paste sounded to me :)

Before starting our trek home, we stopped super quick for the kids to try out the little swing in this giant bird cage... (This makes me laugh now -- you'd think with a video like this that I was capturing the fun of just taking our time and stopping to try out whatever fun an interesting things we happened to come across. The truth was that we'd passed this a few times, and I was very tired, so finally each child got to swing for all of about 5 seconds  before I rushed the next child on... I think I was very anxious to get home!)