There were lots of little details to work out for our trip - lots of little things to decide about or figure out or plan for to help make everything go smoothly. We learned a lot! So, here are a bunch of those little logistics kinds of things -- 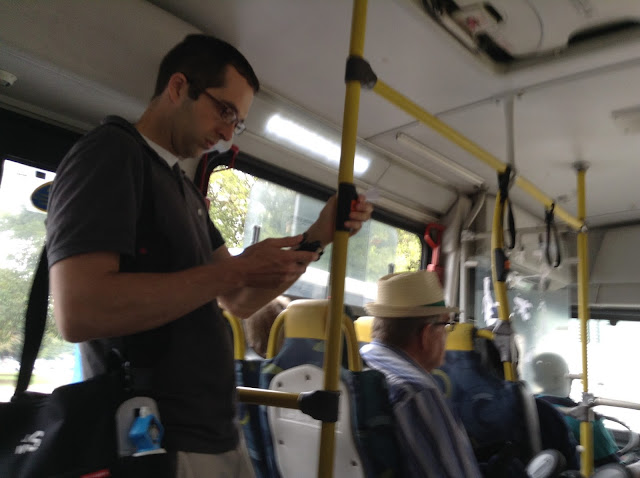 Jordan and Winslow spent a crazy amount of time before our trip trying to figure out the best cell phone solution. (Here's a secret though:  I've learned over the past few years that researching cell phone plans seems to be a crazy sort of hobby for Jordan and Winslow, so this may have actually been more fun than burdensome for them! :) They hoped they had it all figured out, but the technology used had quite recently changed, so their perfect plans had to be re-figured. Our first few days in Brazil were half exploring/sight seeing and half scavenger hunt for the correct sim cards needed. (Which meant Jordan got to use his Portuguese right away and enjoy talking to lots of magazine stand workers!)

And they figured it all out. Nobody got stranded or lost or separated without being able to contact anyone else. (Hooray!) And the data plans worked almost all the time so we had maps available to help us find our way. 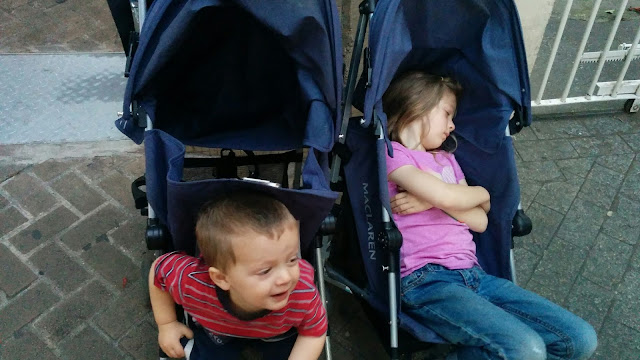 We knew we'd be doing quite a bit of walking, so we packed both of our Maclaren strollers. Porter had a reserved spot, and the other stroller Ellie and Owen took turns in (or, often took turns sitting on each other's laps so they could both get a ride :) 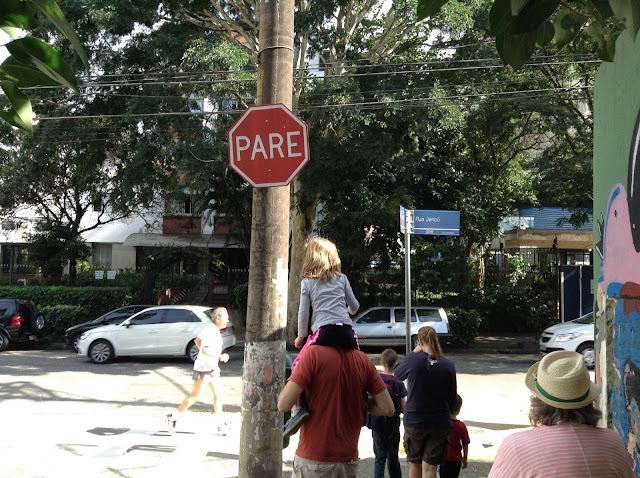 And all three big kids also had a few turns riding Jordan's shoulders too when their feet got a bit too worn out :) 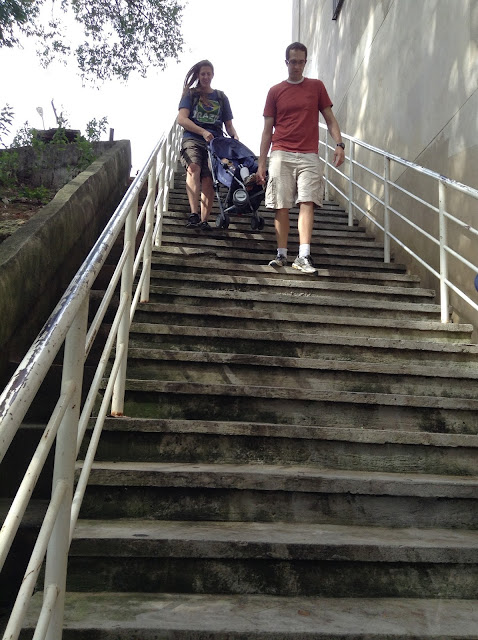 (Sometimes strollers were a bit tricky! :)

An interesting thing - we saw very few other strollers around. In New York, you see strollers everywhere you go, but not in São Paulo. (Maybe because all the little ones are in school?) There weren't that many families around in general where we were, but when we did see little ones, they were almost always just being carried in their mothers arms. (Maybe because of the crazy sidewalks? Strollers probably wouldn't last too long here! :) 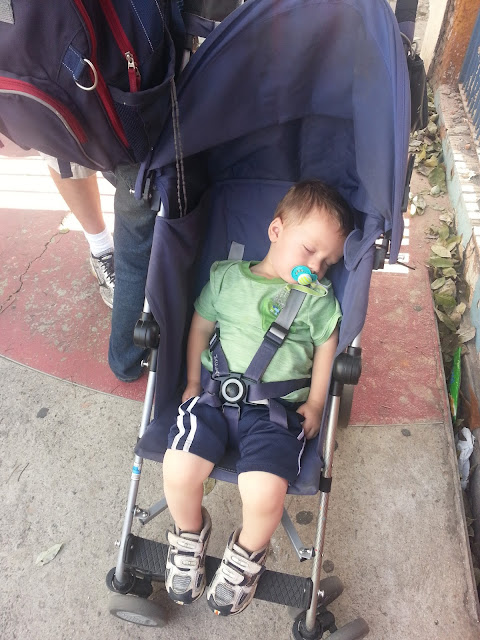 This was the first time we've taken  big trip and not had to plan our daily schedules around nap times. Porter is our only napper these days, and he was amazing at just dozing in the stroller when he was ready for a nap. What a blessing!

In São Paulo, we chose our housing carefully to be downtown and within close walking distance of the metro. And we tried out all of the public transportation options available. (Metros and buses and taxis and walking ) 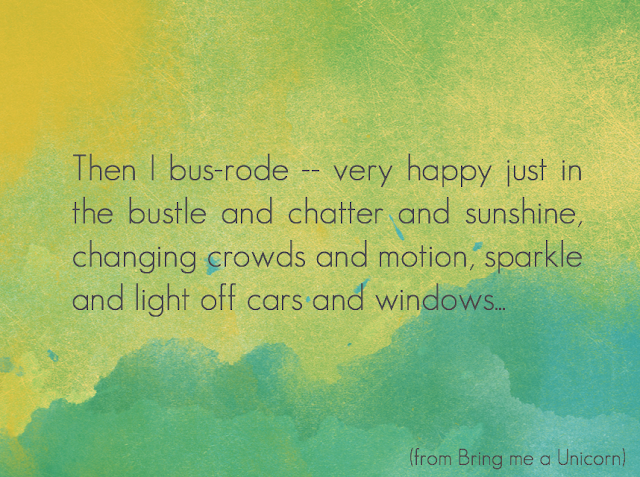 Some of the long rides actually turned out to be a really sweet part of our trip. Since we had such a nice grown-up to kid ratio, I often ended up with just one or two kids next to me. For a long ride. To just sit and talk or play 20 guesses or the animal game, or talk about what we'd seen or would see. It was really great. 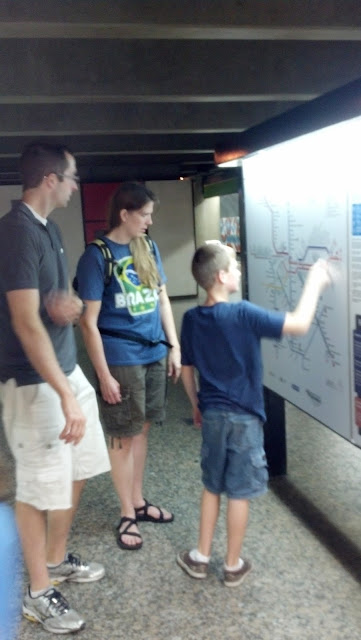 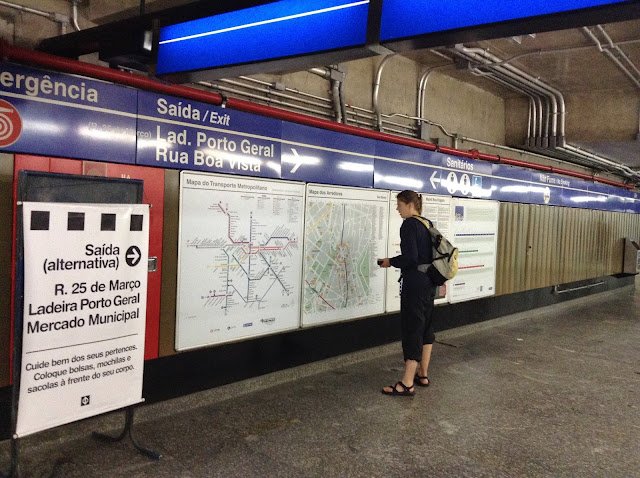 Jordan and April were an awesome navigation team for us. They were always able to find us the right metro lines, or figure out the correct bus stops and which bus to take, or direct us on the right walking route, or order us a taxi when needed. They were amazing! 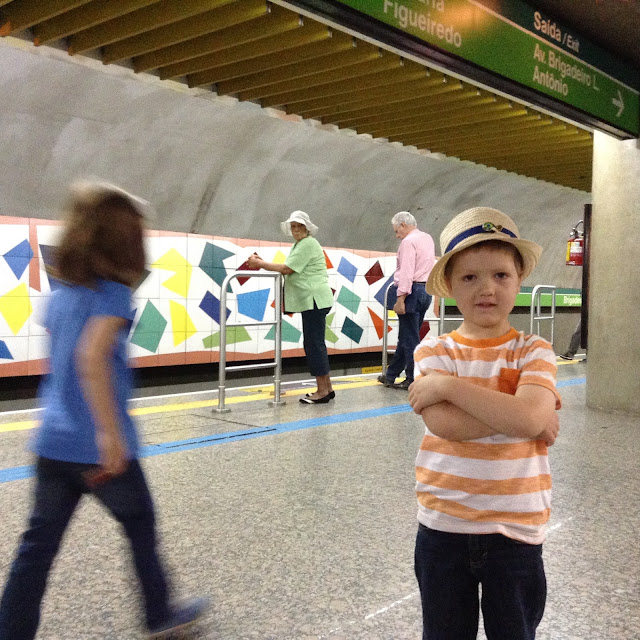 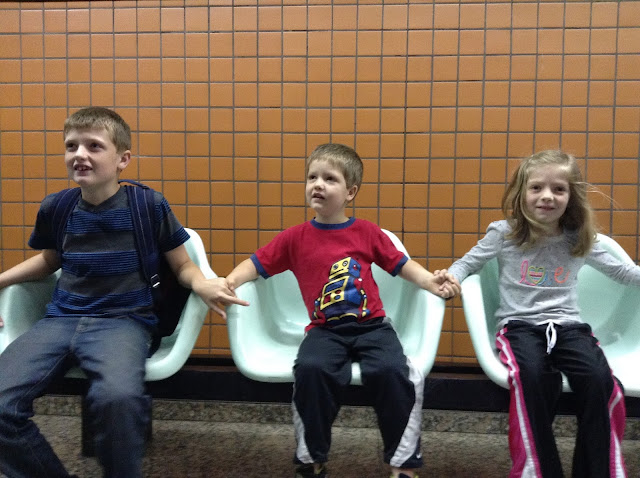 No children left behind (or lost!) at the subway stations, hooray! 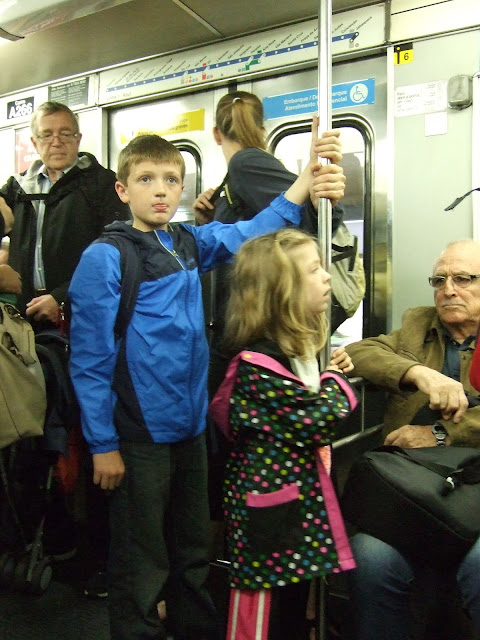 Taxi rides were also such a fun part of our trip. I loved listening from the back as Jordan talked to the drivers (and I'd see how much I could catch from their conversations in Portuguese). It was super fun for Jordan to be able to use his Portuguese and it was just so interesting to hear the stories from the different drivers. (Also fun was trying to have a conversation with the drivers with just the little bit of Portuguese April or Landon or I had when Jordan wasn't in our car :)

For most of our taxi rides, we used an app, much like Uber to order a taxi with our phones. (You'd order it and then it would show you a little map of the taxi coming your way, fun :) 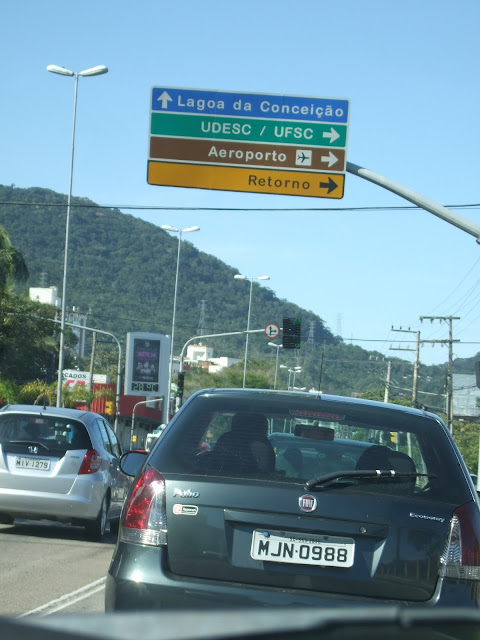 In Florianopolis, we rented two cars to get around the island. (Driving was a little crazier than here, but nothing like in São Paulo. I'd read in several places 'don't try to drive in São Paulo, the traffic is crazy!' And I assumed they meant crazy as in busy - like downtown New York at 5:00 in the evening. But they meant crazy as in crazy!  April had it right "It's like New York traffic at freeway speeds." Then you add in a million motorcycles weaving through every which way...

But Florianopolis wasn't too bad at all - fast drivers and still a lot of motorcycles, but nothing like São Paulo!  (Although, I wasn't the one driving :) April and Jordan and Winslow took the driving job there since the rental cars were both manual) 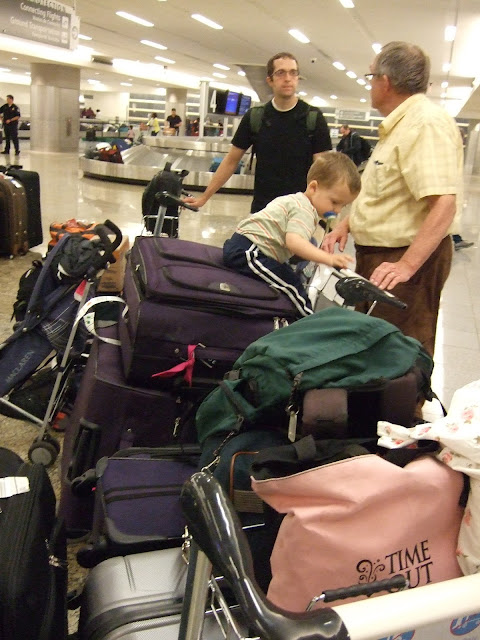 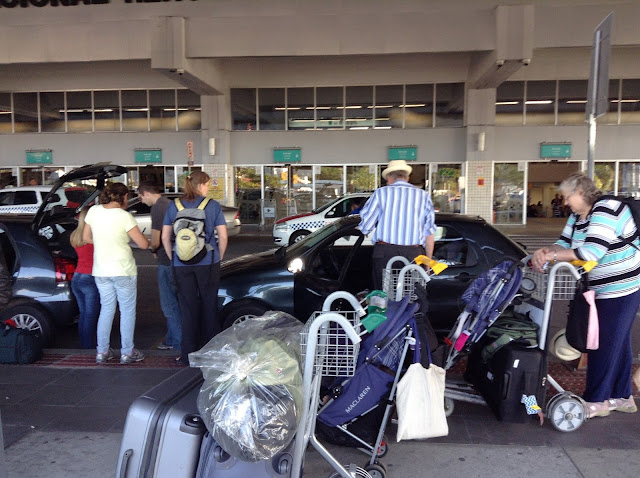 Funny thing - We got to the Florianopolis airport and carted all of our luggage over to the spot where we were supposed to pick up our rental cars, and found two tiny little cars with enough room for about 1 large suitcase in each trunk. (That was not going to get us from here to there with 9 people's luggage!) A friend of the rental car workers had a shuttle bus and offered to help us, and we were grateful for the space as well as someone to follow as we made our way through the city for the first time. 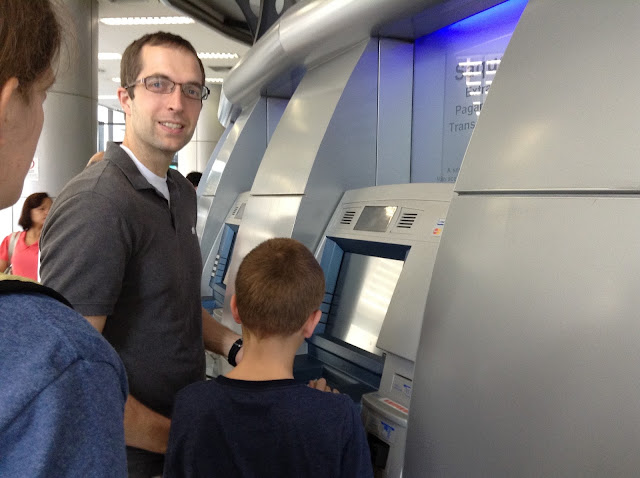 When we traveled, the dollar was particularly strong in Brazil, so the currency exchange was in our favor. (The conversion was about 3 reais : 1 dollar)  I didn't often feel like "wow! what a bargain!" but I also rarely felt like "it costs how much?! I think in general though things were a little bit cheaper there than they would be in a big city here. (And some things quite a lot less)

We had to make several visits to local ATMs to get cash out (for places that didn't take credit cards). Wherever they did take credit, we all used Jordan's credit card, and then worked out the who-owes-who afterwards. (He got a Capital 1 card that had no foreign transaction fees, so it saved about 3% or so compared to what our regular debit or credit cards would have been).

A super interesting thing: many businesses didn't have change. Like if you owed $21.20, and you had no change, they'd just take $21. Or if it was $21.70, they'd take $22. Kind of crazy, yes? Also, there is no 1 centavo. The smallest coin is 5 centavos. So whatever your total is, they just always round if you're paying cash. We were all so curious about this - do they not carry change because it's risky to keep extra cash on hand? Are there not enough coins in circulation? Is it just easier not to worry about exact change? So interesting! 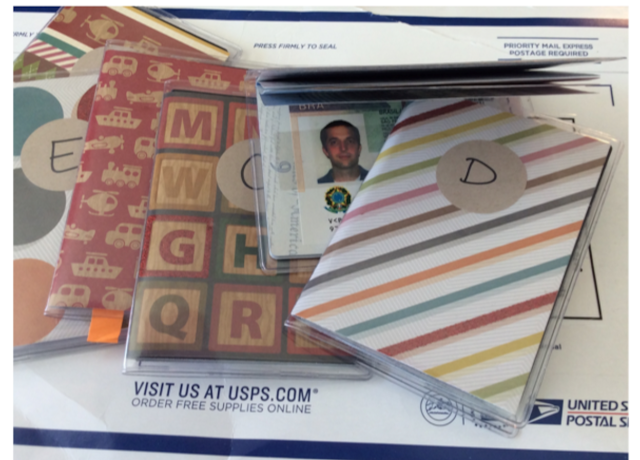 A friend of mine was telling me about their trip to Brazil a few years ago. They'd traveled first to Argentina, which doesn't require a visa, then rented a car to drive over to Brazil. Not knowing they needed visas for Brazil, they ended up in a motel at the border for a few days waiting for their visas to come through!

So, yep. You do have to have Passports and visas to travel. (And it can be a lot of work!)