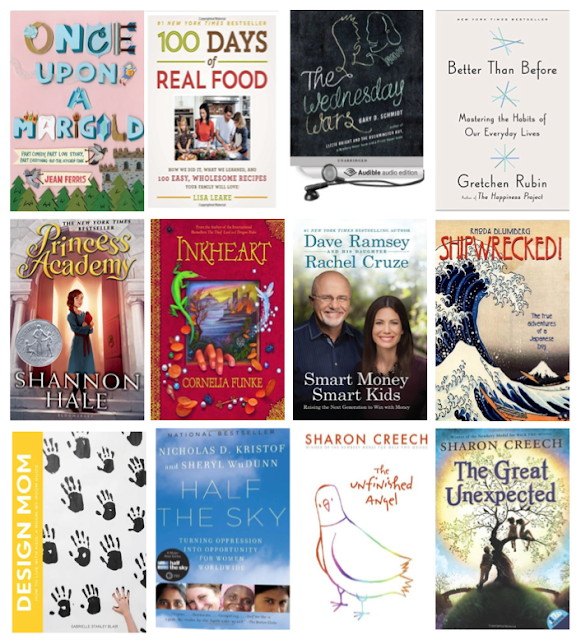 The kids had an art class at the North Logan Library for a few weeks early in the summer. One of the unexpected benefits of this was that I got to have an hour three days each week to sit with the little boys at the library and watch them play, read books to them, and read my own books! Hooray! Here are the latest:

Once Upon a Marigold - I checked out thrice upon a marigold, but realized I'd forgotten enough that I should re-read the first two. (And it was as silly and fun as I remembered)

100 Days of Real Food  - While this seemed a little extreme to me (or rather, something I don't feel enough passion about right now to put into practice), I've still found myself thinking back to lots of the ideas here.

The Wednesday Wars - I listened to this over the last week or two and I just loved it. Here's a perfect review. This is my favorite this summer for sure.

Better than Before - I like Gretchen Rubin and it's fun to read her examples of "I was talking to someone at a party all about habit formation..."  It was good, though maybe I should have waited until I was really ready to start/strengthen some specific habits so I could have immediately put into practice her ideas before I forget them.

Princess Academy - Another re-read so I can read the sequels (and it did get me excited to keep up with the characters in their next adventures). I think Ellie will love these smart, brave, beautiful princesses-in-training in a few years.


InkHeart - Another re-read (I'm seeing a pattern here...) I got this on the kindle before we left for Brazil, planning to let Landon read it while we were gone. But then I started to read the beginning to just make sure it would be a good fit for him, and then I couldn't stop!

Smart Money, Smart Kids - I like Dave Ramsey, so this was fun. Not super exceptional or new, but fun.

Shipwrecked - A kids non-fiction I found when I was picking out an 'all about Japan' book for summer school time. Such an interesting story! Did you know Japan had laws set up through the early 1800's  that kept it almost completely isolated from the rest of the world? I've been reading it aloud again to the kids the last few days for simplified school time :)

Design Mom - Hers was one of the first blogs I started reading years and years ago.  I hadn't kept up with her blog for the last few years though, and somehow thought that I wouldn't love the book.  But, I did! It felt like an old friend giving all sorts of fun ideas of how to make my home a lovelier place to be.

Half the Sky - A book club book I actually chose not to read mostly. But the idea is important and seems to be coming up more and more (like the amazing work being done by OUR)

The Unfinished Angel - My favorite part was the author's description of why she used such nonsense language throughout the book - she was writing this as she stayed in another country and felt like she just had to include the way her own language was so mixed up at the time.  Also,  a sweet story about being an angel and helping where you can help.

The Great Unexpected - Ha! Another re-read, except I didn't notice until I was several chapters in. The great thing about having such a poor memory is I can enjoy these good books again and again! :)

The Black Book of Colors

We're Going on a Bear Hunt