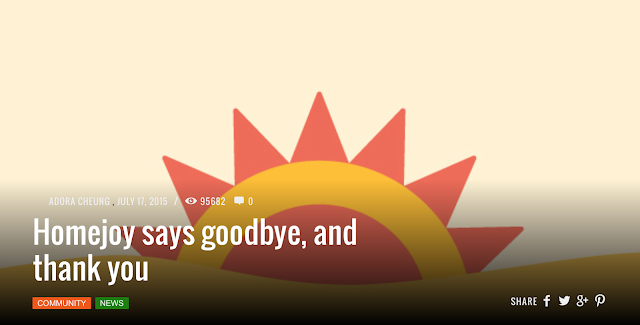 Early last year, when Jordan decided he was ready to say farewell to Animoto, he ended up with two awesome offers from two great companies: Bonobos and Homejoy. We had an intense few days talking and discussing and weighing all the strengths and weaknesses of each choice as we deliberated about which job would be best for Jordan and for our family. At last, we made our choice and Jordan joined the Bonobos team, excited for a new adventure.

And Jordan has been very happy at Bonobos. He has great work to do, great people to work with, and a perfect remote work situation. Every once in a while, Jordan would think 'what if I'd chosen Homejoy?'  Like when his good friend who recruited him to Bonobos quit two weeks after Jordan started (!) Or, when we'd see headlines  popping up for Homejoy and its founders from the tech community.   So, not a what-if in a wishing way, but just in a curious 'what if?' sort of way.

And last week we saw a bit of where that what-if may have lead when we read the news that Homejoy was shutting down. What if Jordan had chosen Homejoy? He would be suddenly looking for a new job right now!

Later, we read that Google was taking on Homejoy's tech team. What if Jordan had chosen Homejoy? We would suddenly be deciding between a move to the Bay Area (since google isn't super remote work-friendly) or looking for a new job...


It seems like when you make these big choices, you don't often get to see where the other path may have taken you, so this has just been interesting to watch and see just a little bit of that.