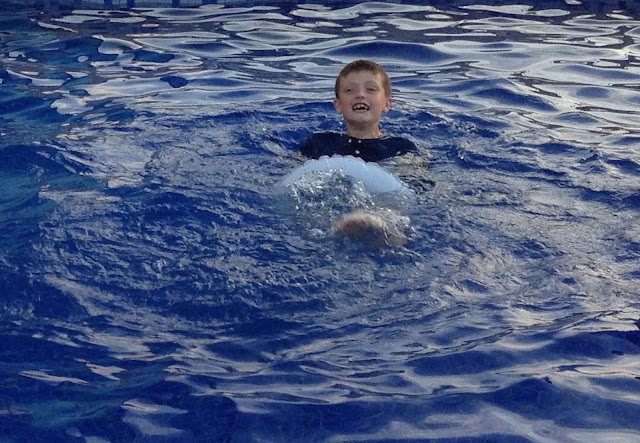 We just finished swim lessons for the summer today, and oh, it was fun!

Porter and I hung out upstairs while the kids had their lessons below. I watched the kids swim and read books to Porter (teddy bear more times?) in between his mini explorations (be right back?). And Porter was excited to find a few friends to play/crawl around with. Come? he'd ask the "babies" (to Porter, really anyone younger than about 4) and off they'd run or dance or crawl a minute at a time, racing back to mom in between, while we waited for the whistle to sound for the end of class.

Then we'd all head outside and swim for a while longer -- and I was amazed that for two weeks, I took all 4 children swimming almost every day and they're all still alive! I wouldn't have dared this in the past, but Landon has improved enough that I felt like he could be a little more independent as long as he stayed close. And Ellie and Owen were good buddies for each other and were great about staying in the touchable depth. Porter was panicked for the first few days (half about the water and half about the inflatable alligator floating nearby), but this week he would happily float around and splash and play.

Ellie and Owen stuck together in their class and practiced strengthening their brave muscles and putting their faces in the water (and both did even better than I had expected!)

Yesterday I looked down at Landon from above as he practiced his free style stroke across the pool with the instuctor and I was just amazed. He's gotten really good at this (better than me now!) What a joy to see him working hard and making such great progress and to just see his arms so strong and his legs moving him quickly through the water -- my little, not-so-little growing up Landon!

So, hooray for successful swim lessons and this happy part of summer.