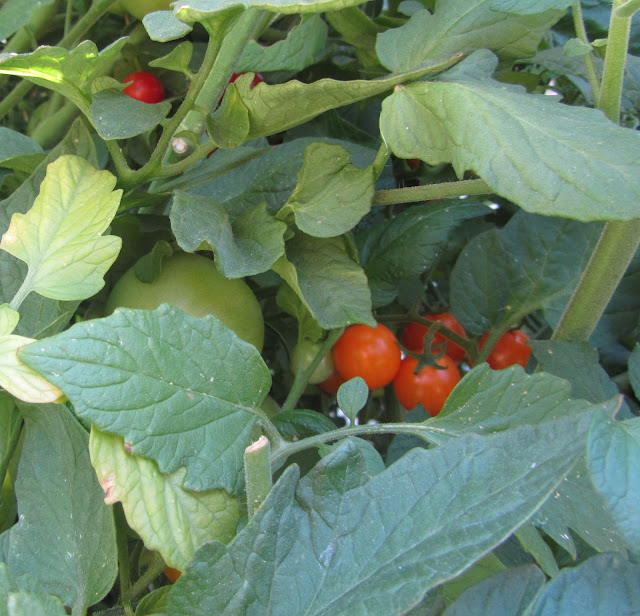 "Think of having a garden-- to dig and smell and put new slips into and-- garden gloves! Old grubby ones, but still, what they do suggest!" (from Bring me a Unicorn)

We have had two days of rain, rain, rain and I'm just so happy for our little garden! We've reached that point in the summer where I sometimes forget about our veggies (which is silly since now is the time when we can use them at last!) Ellie has had 3 or 4 giant zucchini in the last few weeks that have overgrown between our now more spread-out watering days.

This year's garden has had: lots of zucchini (which we've loved), a few sunflowers, lots of pat-a-pan squash, a few yellow squashes, and lots of tomatoes. (and one serving of green beans... with maybe more to come?)

And a lesson in patience. I planted one full garden box (and another half, I think) with green beans near the middle of June, along with the sunflowers, squashes, and corn (don't plan corn mid-June, ours was knee high while everyone else was harvesting :)

Within a couple of weeks a few green bean plants were popping up (maybe 3 or 4) and Landon's sunflowers  in one garden box were growing but Ellie's in another were not. So, we kept watering and weeding and watching for a few more weeks. Finally mid-July or so I gave up and stopped watering. And then another month or so later, mid-August,  with no watering or care,  up came little green bean and sunflower shoots! I don't know enough about plants to know if that was normal, but it was just such a fun surprise to see these plants I'd given up on decide to grow after all!
Posted by Debbie Brough at 12:13 PM