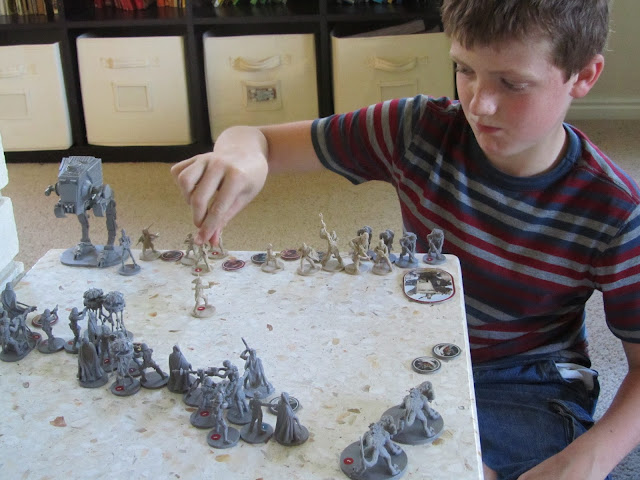 Earlier this summer, Jordan took the kids out on errands one afternoon and came home excited about a new game. Two days later, Imperial Assault arrived on our door step and it wasn't long before both Jordan and Landon were hooked. For the last several weeks, they've had a permanent space set up in Jordan's downstairs office/exercise room so they can jump into a game whenever they have some free time. (Or, whenever mom's gone in the evening and Landon can convince Jordan to let him stay up late to play!)

We've talked a lot with the kids (in general) about being a good sport when you're playing a game, whether you're winning or losing. But suddenly Landon was winning a lot and Jordan realized just how hard it can be to be a good sport when they get your best guys!  or other tricky situations. So they've both worked hard at winning and losing gracefully Every once in a while they've had to set some breaks for themselves, one of which they've had for the last week or so -- 'let's take a break and not play until the expansion pack arrives.' (And Jordan may have purposely avoided prime shipping on this order...)  But, Landon told me this morning, "It's Thursday, right? The expansion pack is coming today FedEx!

Also, I mostly took that picture at the top just because I love so much to watch Landon play. Truly, catching him just playing like this is one of my favorite things.