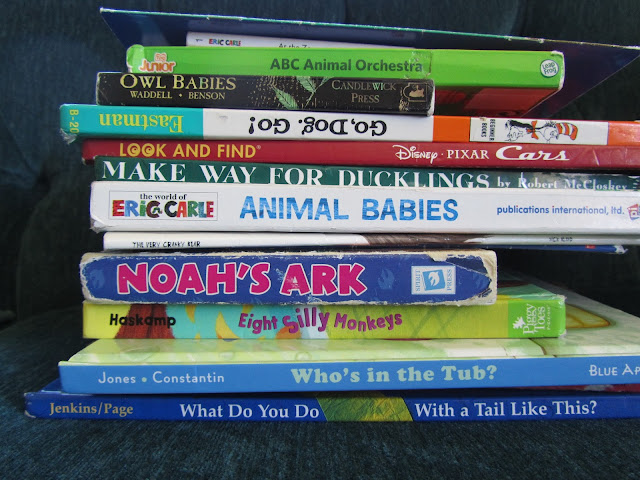 We were out late on Thursday night, and Owen was super sad to have missed all of their reading time before bed. Trying to calm him down, I told him something like "tomorrow, we will have plenty of time to read a great big stack of books." So Friday morning, he woke up and started emptying our bookshelves and making a truly great big stack of books. We worked through them, and Jordan even helped with extra reading time during his lunch break, but we still managed to make it through just a medium sized stack by the end of the day. (This was a fun goal though and it helped me stay focused on using even the little minutes in between to squeeze in another book with Owen instead of getting distracted by something not-so-important.)

There is a big grassy/hilly  area by the hospital that we ride by a lot on our bikes and the kids always want to stop to play. Friday night, we made it our destination. We rode down and picked up dinner then went to the grassy spot for a picnic and playtime. Jen & Ethan and Grandma Maureen even came to join us for a bit and got to watch the kids run timed races around the loop.

I spent Saturday down in Provo running a few errands and visiting with family at Danielle's baby shower - fun!

While I was gone, Jordan and the kids had a fun morning/afternoon on their own...until Jordan got hit in the eye with a super fast/hard nerf dart and spent the rest of the day (and half of Sunday) unable to open his eyes! Landon took charge helping out and all the kids were healthy and happy when I arrived late Saturday night - phewph!

Since I had nerf guns on my mind Saturday (and I was traveling all day and didn't have much time to plan a singing time lesson...), we did a fun nerf game in primary and nursery where the kids got to shoot the board (with songs taped/written up)  and we'd sing whatever song they hit closest too.

Friday night, Landon planned a mini carnival for our family and did an awesome job with a money race, a long jump and a counting/guessing game contest. Complete with quickly made poster advertisements and an official circus announcers voice throughout, it was a fun quick little activity.