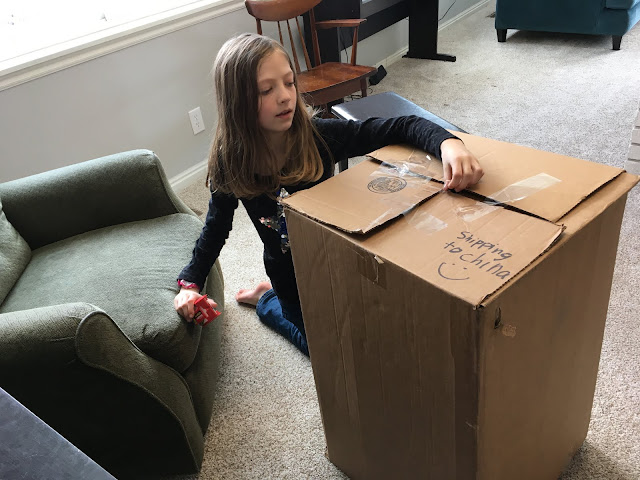 The kids are all here and there this afternoon playing with friends on today's half day from school. (One friend is on her way to China apparently ;)

I've been thinking for a long time about how to write about my rheumatoid arthritis and the impact it has had on me over the last 5 1/2 years. (And those times at night when my writing-brain turns on, it tends to be much braver about sharing than I feel when I actually sit down to type each afternoon!)

Even though it has been a few years since the hardest times with RA for me,  I'm still  finding and noticing little things that help me see how much better I'm doing and feeling now just because I can remember how hard those things used to be. For example, scheduling one play date for one child was on the edge of impossible a few years ago because even thinking about sending that one text just felt too hard! (Not because I couldn't actually text, but because I was just hurting all the time and worried and so, so tired and overwhelmed and everything felt so much harder than it should.)

Having all the kiddos (except napping Isaac) playing today and knowing that it wasn't a giant effort to make it so is such a happy, tiny reminder of progress.

I fell on the ice yesterday (one second carefully walking down an icy hill, the next second staring up at the sky from flat on my back!) and I woke up this morning just kind of aching all over... And I felt that old familiar discouragement settling in, and had to keep reminding myself this was just one hard day from that fall and that tomorrow I'd be feeling much better again.

Because, really, in the last little while I have been feeling not just 'better' but real, exciting hope! I've been on a new medication and have had a lot of general 'I think I'm feeling better, right?' kinds of days, but then in the last few weeks also some real, specific - I know I'm feeling better moments too.

A few weeks ago, I was cleaning the kitchen and saw a little toy or something under the table and without thinking I climbed down on the floor to get it. And as soon as I found myself on hands and knees, one arm reaching ahead under the chairs for the toy, I realized 'this is new!'

Not long ago, I wouldn't have considered trying to get into a position like that because it would have been impossible/painful/exhausting. But there I was! Without even thinking about it, I knew I'd  be able to reach down and grab that little toy and be able to get back up again, all like it was no big deal.

But, what a big deal!

One morning a week or two ago, I was making my every day oatmeal. I opened the fridge, lifted the full gallon of milk, carried it to the counter, set it down and then went to open the not-yet-broken seal - all before I realized 'oh, yeah - I can't open this!' And again it was such a wonderful, grateful moment! It was only about 7:30 in the morning, and I had gone through that whole process without even thinking about my hands.  (Also super sweet was Owen watching me and automatically reaching out for the milk to help.)

I know even a month or so ago I would never have tried to open a new gallon of milk that early in the morning, because that whole little process of just getting it out of the fridge would have given me so many reminders of how my hands weren't working as they should be yet.  Forgetting - not noticing my hands -  was such a sweet feeling! It was just a super exciting moment of recognizing progress, of  "oh! I'm getting better!"

And there have been lots more moments -- leaving for a walk with Jordan without first thinking through whether I felt well enough that day, taking a minute to consider making some scrambled eggs for Porter one morning (not yet, but almost a possibility!), waking up one morning and touching my left pointer finger to the base of my thumb (a celebration!!!) all these wonderful little things.