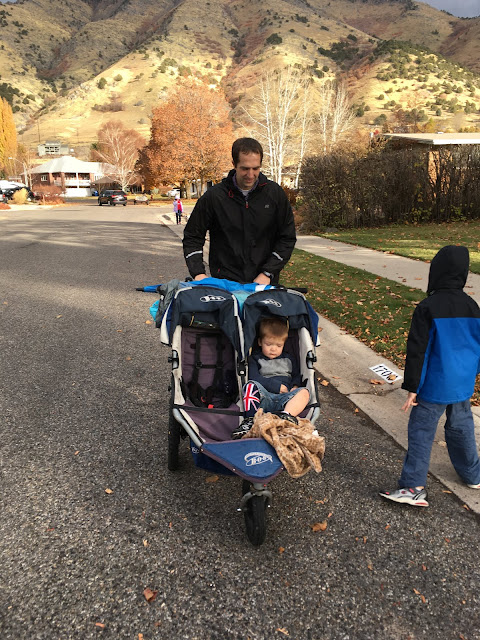 If that sounds familiar, it is! It was only a few weeks ago that we were welcoming Jordan home from a week in NYC, and yesterday he returned from a week in Montana! April is moving into her new home, and also just had foot surgery so Jordan spent a week up there working and also helping pack things up, carry things downstairs, and otherwise help April stay off her recovering foot :)

We had such a busy and full day yesterday and Jordan just jumped right into it so seamlessly that early in the afternoon as we were in the front room together Owen said "Oh! I forgot you were gone and back!!"

Jordan was working while he traveled home through the morning, and he walked in about 10:00, continuing a meeting he'd been having while on the shuttle, and headed to his office till we left for Lego Robotics.  (So Owen first saw him at Lego Robotics... like he always would on a Tuesday afternoon so it just felt very much like normal!) Then we had a rush of pick ups/after school jobs/dinner/young women's/bedtimes... (Plus a quick turn of shoulder angels earlier in the day for Porter and Isaac!)

It still feels so strange/amazing to me that Jordan could wake up early and start his work day from the airport in Montana, and then just continue on working away as he traveled over 500 miles back home via airplane & shuttle, and finish the work day from his own little backyard office!

We're sure happy to have him back home!