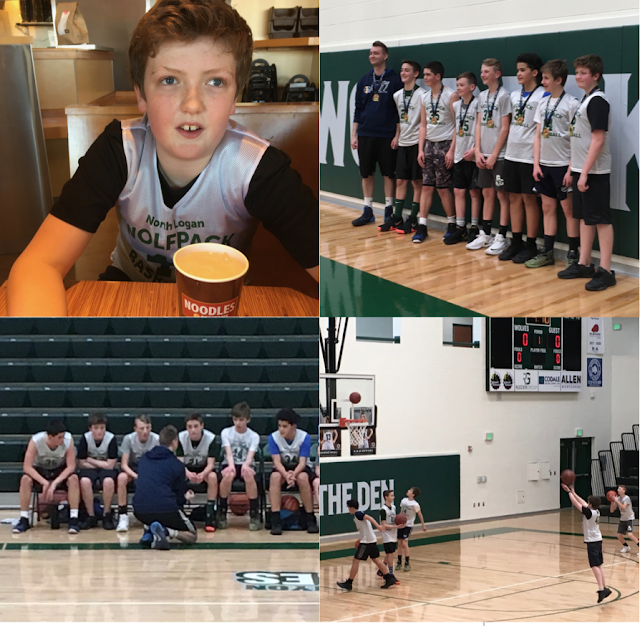 This Saturday, Landon ended his basketball season with a tournament, and it was really fun to get to spend the day with him cheering, hanging out in between games, and having lunch together in the middle too.

A few things about this season:

* Landon's a good player, but he ended up on a really good team (they won every game they played) with boys a year or two older who were all good friends already... it was a tough team to join! But the kids and coach were nice and mostly I was so proud of Landon for getting through it!

(Also, Landon said on Saturday, "Thanks for helping me through this mom!" which warmed my heart... especially since there were a lot of strong "Do I have to go...?'s along the way too)

* His coach was very good, and also very down-to-business -- no feel-good, Dad kind of talk like other coaches the kids have had. At one of Landon's last games, I found out he wasn't one of the players Dads (like I had assumed) but an older brother (about 21 years old!) Ha! It all made a lot more sense then  :)( Really, his coach was super. Landon learned a lot, and his coach was great at giving all the players time to play - even when a game was close and he might have wanted only his best players in!)

* At one practice (with a good deal of dreading leading up to it) the boys ended with a scrimmage like they often did. They were setting up to choose teams, and the coach said "but, I'll be the last pick" so Landon was thinking "well, good at least I won't be the absolute last one chosen..." But then, one of the boys picked him first! It was such a little thing, but that little bit of kindness really made a difference.