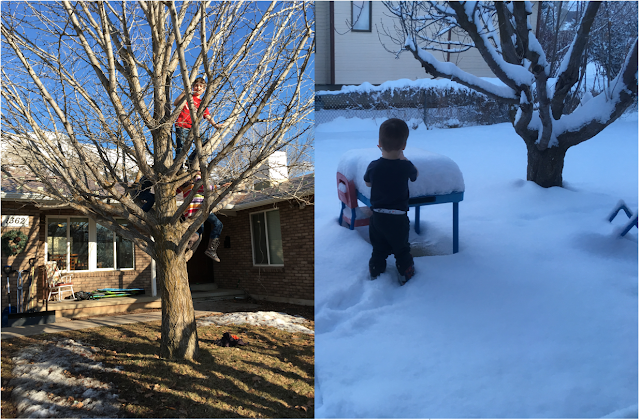 1. You would think these two pictures were taken months apart, but they are both from this week! Certainly in January I might wish for San Diego's constant 70 degrees, but the crazy back and forth we get as the seasons get ready to change is pretty fun too.

2. We've had a shiny red car in our garage this week that the kids think is pretty great. (From a friend who we pick up from school each day "Whoa! This car is way nicer than your regular one!"Ha!)  Jordan hit a rock in the canyon driving back from Ellie's ski day last week and the end result was that we're having to have the van's engine replaced. As we started driving our other van this week we realized it has some issues that we need to have looked at before driving it too much more. So we're driving this bright red rental! And we've been grateful that things are working out as smoothly as they are though even with some pretty big car troubles!

3. I came across this cyclist/artist's site yesterday, and I think the idea is so fun -- he plans out a route and then when he bikes it, his gps maps out the picture he designed. Jordan really likes to have destinations in mind when we go out for an adventure and this seems like it could be a fun thing to try sometime!

4. I've been tending for a friend for a couple days this week, and the boys have had a fun time having an extra friend over to play! We even made play dough yesterday :) Jordan took a half day today along with the big kids and took Ellie and Owen skiing, and Landon's playing with a friend so it's a quieter day with just these littler kiddos at home. (Also, Porter is not a fan of quiet time!)

5. Ellie and Owen have been getting up early this week and working hard to finish all their morning jobs as quickly as possible, and they've done great -  even to the point that they were both starting to wonder what to do with all the extra morning time!

6. We've had young women's activities at our house a few times in the last month or so, and a book group last week and I'm still getting used to these things. We don't have company over much, so even those little things feel big.   And I've felt for a long time like there's truth to the idea of how important it is to just invite people into our homes - imperfect as they may be - but then I also feel really stressed about that imperfectness when it comes down to people arriving in a few hours.  Still more to figure out here!

7. I finished the watercolor class I've been working on, and I liked it so much, I signed up for another painting class. (It's a very different style this time though!)

8. Last weekend, we had a pizza movie party like we do many weekends. It felt extra fun though because we had picked out a movie a couple weeks in advance and we even wrote it on the calendar "Ralph movie night" so we got to anticipate it like a big event for a little while.

9. A few weeks ago I took the kids skating at Cache Valley Fun Park, and when the pizza wait was too long we ordered some soft pretzels instead. As we were eating our pretzels, the kids were remembering their favorite street pretzels from New York and the questions from the kids   went something like this... "When do you think we will go to New York again?  If the kids all saved up all our money and we paid for our airplane tickets to go, would you let us go sooner than you think? How much is a plane ticket to New York? Hmm..."

10. This year, I've been going in to help with Porter's class once a week, and for the last few weeks I've gotten to also spend some time in Owen's class which I love. In Porter's class I get to help with "STEAM bins" with a small group (I love this!) and in Owen's it's the last part of the day when his teacher is gone to a faculty meeting so I just help or join in with whatever happens to be going on.

Posted by Debbie Brough at 1:01 PM